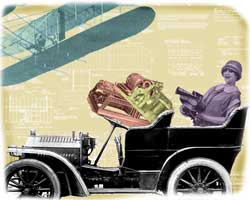 As I type this, the new Hadron Collider somewhere under the Alps on the French/Swiss border has just had its first successful test. For those of you who have been living under a rock for the last several years, the Hadron Collider is the biggest particle accelerator on Earth.

It was built with the hopes it would clue physicists into the nature of the universe by revealing particles that only exist when you smash two Hydrogen atoms into each other at nearly the speed of light.
Now, that’s all well and good, but lots of folks (mostly the same ilk as the ones who were afraid of sailing off the end of the Earth or the nut jobs who are convinced the Raiders have a chance at a title while Al Davis lives) were concerned that firing up this bad boy might mean the end of the Earth—or maybe even the universe. And while that does sound like the beginning of a Douglas Adams novel, it more likely signals the start of a new era in science, which got me thinking about some other technological innovations that shaped the course of history (in no particular order)…

1. Flight: In 12 seconds over Kitty Hawk, North Carolina, on Dec. 17, 1903, Orville Wright proved man could fly, all so you can pay an extra $25 to take your suitcase with you on that trip to Madison next month.

2. The Telegraph: While everyone thinks of the telephone’s importance in connecting man across great distances, it was the telegraph that first used electro-magnetic current to transmit signals over distance, thereby opening the door for the phone and later, the Internet (thus saving us those embarrassing trips to the adult bookstore).

3. The Printing Press: Though the Chinese developed the technology first, it was a German named Johann Gutenberg who developed the press in 1439 that really gave rise to the publishing industry. And despite what all the “experts” say, there’s still plenty of life left in this old dog yet. But nothing has contributed more to culture’s evolution and development (and de-evolution, for that matter) than the written word. Let’s not forget how important Mad Libs are!

4. Internal Combustion Engine: Though it was a collaborative effort (that even included Leonardo Da Vinci, who also lent his considerable talents to the Wright Brothers research), a Swiss man named François Isaac de Rivaz built the first working model. Without this one, forget powered flight, commuting, OPEC and air pollution. On second thought…

5. Phonograph: Thomas Edison had to end up on this list, right? He was the first to record and reproduce sound, using a cylindrical device that later evolved into Emile Berlinner’s disc. Then it was onto 45s, LPs, 8-tracks, cassette tapes, CDs, and the self-sustaining legal quagmire of copyright litigation we have today. Good times.