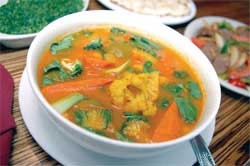 Somewhere north of India lies the high mountainous terrain of Tibet. The small plateau in the middle of China claims only two-and-a-half million people. And, as far as my research was able to tell me, they eat a great deal of beef and mutton—sometimes boiled, sometimes dry, sometimes raw.

Oh, did I mention they also eat yak?

It’s unlike me to turn my reviews into book reports, but in all honesty, I had no idea what to expect when checking out Tibet’s Restaurant in Louisville. Ironically situated next to a sprawling Chipotle and an ultra-modern Walgreens, Tibet’s couldn’t offer the authentic stews I read about. Could it?

The inside was promising. The décor starkly contrasted with the strip mall exterior, I’m happy to say—a quasi-shrine to the Dalai Lama, rolling with pillows, crept into a deep alcove at the entrance. The hominess was quite unlike American restaurants. In the center, butting up against the outside wall, was a stocky stone fireplace. The walls were tastefully decorated with hand-woven fabrics of a dozen colors, extended horns and pictures of what, I assume, was Tibet.

My friend and I were suitably impressed with the design, but found little difference between the menu’s Tibetan offerings and that of Little India. The standard curries were all in attendance; vindaloos, masalas, saag, naan, pappadam, samosas and korma all figured into the six-page menu. On the final page, however, I found a unique collection of Tibetan specialties—the mountain food indigenous to the region. Feeling a bit daring, I ordered the Thenthuk Stew ($12)—but not so daring that I ordered it with yak. My friend, curious about the deviations from Indian cuisine that he knew, ordered the Lamb Chili ($13). To start, we eased into the meal with a generous bowl of saag ($6), a traditional curry dish, and a basketful of naan flatbread.

Most days, I will unabashedly tell you, I don’t like saag. I love spinach, but when it takes the form of saag, it seems defeated, limp and unappetizing. In the spirit of openness, I heaped a spoonful on a piece of plain naan and nibbled away. It was, by both our accounts, the best we’ve ever had. It was creamy, slightly delicate and rich. No flavors shouted at us, but they weren’t supposed to. They did quite well smeared on piece after piece of naan. Though, I will tell you not to overindulge. It’s heavier than you think.

Our entrées arrived shortly after our saag overindulgence, and we took a minute to absorb the presentation. The lamb sat in strips among bell peppers and onions, while my steaming bowl of stew appeared more like a beef soup. If anything, the portions were generous.

While many a soup broth wrestles with too much or too little fat, my stew seemed to hit the mark. Mine was simply perfect—lightly spiced, but rich with beef and a panoply of vegetables. My only gripe is that the morsels of beef were overcooked and, consequently, a bit chewy.

The Lamb Chili was not a rousing success. The lamb, much like my beef, was tough, and there wasn’t much to accompany it—bland peppers and blanched onions. Paired with naan, it wasn’t much of a meal. This complaint aside, we left fat and happy. Though I still wonder if Tibet’s is the measure of Tibetan food, it dares what many restaurants only hint at—a grasp of a cuisine so far out of reach of American consciousness we mostly consider it fictional. Or, in my sad case, liken it to a cuisine which I do know.

“So Tibetan food is like Indian cuisine, right?” I asked myself.

Sort of. With more yak.

303.665.2557
321 S. McCaslin Blvd., Louisville
Bottom line: A fun diversion from the norm with adventurous dishes that might be authentic; certain dishes could use a bit more TLC.