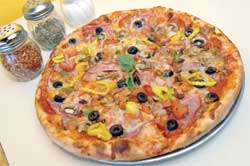 It’s been months since we published our Best of the West winners (April), so getting a phone call a few weeks ago questioning one of our picks seemed a little out of the blue. We love hearing from readers, and this East Coaster’s query was a lightly veiled challenge:

Pulcinella’s, he said, beats the pants off our favorite pizza place (and the reader’s choice for that matter). Rather than stubbornly stand up to our picks, it was my duty (that of any decent critic) to taste his pick for myself.

Pulcinella’s Pizzeria, an offshoot of the upscale Italian eatery in Old Town Lafayette bearing the same name, doesn’t offer much in the way of ambience, but then, you generally don’t go to a pizza place for the experience. Nestled between two identical storefronts, it sports bright yellow walls, a handful of tables and chairs, and most prominently, a giant, hanging menu. The atmosphere is relaxed and quiet—no noisy orders shouted from the recesses of the kitchen, no servers bustling around stacking plates and slamming glasses together. Just me, a few pizza makers and the pizza.

While Sicilian style pizza is an option, the specialty is definitely the Neapolitan—between the Classic and Signature varieties, there are 14 to choose from. And, while celeb chef Mario Batali claims the center of any good pizza is the crust, I would offer an amendment: Any good crust has to stand up to fresh, quality toppings.

Hence, my choice: The Pulcinella King ($14). A 12-inch round of crispy crust served as the canvas for nine toppings—everything from banana peppers to Canadian bacon. My first thought: There’s no way a thin crust pizza could possibly hold up the weight of so many toppings. I expected the worst, envisioning a stalwart crust, cracker crisp at the edge, tapering to soggy mush in the center. This is always the bane of thin crust.

Much to my surprise, however, I found the opposite to be true. Not only did the crust stand firm, but the ingredients proved to be, oddly, light. Nothing smacked of greasiness, and the combination of flavors didn’t even begin to overpower the cornmeal undertones of the dough. Unfortunately, the tomato sauce was a bit salty—perhaps an over-compensation for what usually ends up being a sweet paste beneath a heap of mozzarella. And, while part of me would like to say one or more ingredients stood out, they all mingled together; nothing was outstanding, and nothing distracted from my overall enjoyment of three hefty slices.

But a pizza place can’t be judged on one pizza alone. So, I indulged again—this time in the Roasted Peppers Signature pizza ($11). A simple blend of peppers, olive oil, garlic and mozzarella topped the same crust that had already won my enthusiastic approval. However amazing the crust was, the rest of the pizza let me down. I really couldn’t taste anything but limp, slightly oily red peppers and a heap of mozzarella. For some people, that equals a job well done, but I was eagerly awaiting the kick of garlic, the subtle panache for a pizza that too often washes itself away with blandness. I’m not saying flavor was absent, but upon returning, I’d try something else.

On the way out, I grabbed a takeout menu and eyed the other goodies Pulcinella has to offer. Calzones, salads and dessert in two forms: the classic tiramisu and chocolate mousse. Sadly, I didn’t have enough room to order anything else, but was nonetheless intrigued; maybe I’ll sample them on my next visit.
So I know you’re wondering if Pulcinella’s pizza topped our Best of the West pick (Zamparelli’s just down the street in Lafayette, by the way). You’ll just have to wait until April’s Best of the West publishes to find out.

303.664.1599
385 Crossing Drive, Lafayette
Bottom line: The crust makes the meal worth a trip if you’re hankering for an East Coast-style pie.