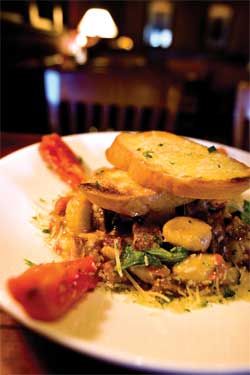 The economy is in the tank, Americans are scared to use their credit cards and our future hangs on an election. Few seem that eager to dine out anymore. What a shame! This is what Kevin Fitzgibbons faces each night at Village Tavern in the Village at FlatIrons. So when challenged with Italian sausage as this month’s ingredient, he turned to the basics. We came back 24 hours later treated to a testament to comfort food—Italian Sausage and Gnocchi with Plum Tomato/Vodka Cream Sauce. Let’s call it a recession buster.

Fitzgibbons was promoted to kitchen manager five months ago. He’s had to be creative to keep customers coming through the doors of the massive Village Tavern with the economy in turmoil. What he has found is that people want simple food, and they don’t want to spend too much money to get it.
It’s as if we read his mind, challenging him with Italian fennel sausage and giving him the chance to produce a dish as comfortable as the restaurant’s deep booths. This mild version of pork sausage is extremely versatile. It can steal the flavor of a cacciatore dish, blend into a tasty lasagna or add zest in a gut-busting breakfast burrito.

Since the sausage is Italian—it’s the seasoning that makes it so—Fitzgibbons opted for an Italian-themed dish to feature in this month’s challenge. Beginning with a bed of homemade potato gnocchi, the dish features the sausage, browned in garlic and olive oil. The sauce is the selling point, however. Or should we say sauces?

Fitzgibbons decided to mix two of his favorites to kick this plate up a notch. The first is a simple plum tomato sauce that blends diced white and red onion, roasted chopped garlic, diced plum tomatoes, plus a dash of fresh oregano, salt and white pepper. While tasty, Fitzgibbons felt it was a little too pedestrian. So he chose to add  zest and thickness by mixing in a succulent vodka cream sauce. By using a cup of top shelf vodka instead of white wine, the spirit adds a subtle kick and highlights the tomato, herb and spice notes of the sauce (wine would add a bit of flavor, by comparison).
Finishing the dish are three cheeses (Parmesan, pecorino, smoked mozzarella), baby arugula and two large, toasted croutons.

This dish is by no means fancy. That’s not the Tavern’s style. With Fitzgibbons in charge, the menu features a solid repertoire of filling, tasty and creative dishes that won’t put a big dent in your wallet. This creation also passes Fitzgibbons’ personal test: Is it something he’d like to eat?

“This is being wrapped in a blanket on a cool night. It’s filling. It’s comfort food,” he says. “It’s something I’d eat—three times a week.”