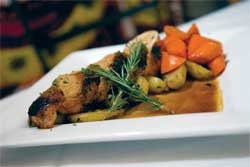 When a restaurant looms above you, punctuated with hand-etched archways and sprawling paintings of fantastical scenes; when the entryway is marked by a free-flowing fountain that perches above a wealth of koi; when the surroundings are marked by wrought iron trellises and unending rows of vines, it does something to expectations.

It says, without need for embellishment: We are unequivocally outstanding.

The origins of this iconic restaurant come from a relationship between sister-cities Dushanbe, Tajikistan, and Boulder. In the ’80s, the two agreed to share representations of their cultures. Boulder was gifted with the handiwork of master woodcarvers, artisans, and painters whose work forms the impressive design of the Teahouse. Dushanbe, just last month, received a cybercafé.

I was curious during two visits who got the better end of the trade. On my first drop in during a crowded Saturday morning service, brunch seemed particularly ordinary, save perhaps the Persian Kufteh ($9.50). I could have been brunching anywhere. The Teahouse’s decor sets the bar much higher. Determined to give Dushanbe a second chance, I visited for dinner, which featured a menu more representative of the teahouse’s reputation.

We huddled next to the window as we watched the impending rain on the open mall outside. Our server, darting between the tables in a professional dance of order-serve-order-serve, stopped at our table every so often with a grin to ask how we were doing. After indulging in our cocktails, we were doing remarkably well.

Out of respect for Dushanbe’s tea culture, we ordered a collection of tea-centric cocktails: the Chai

Russian (a blend of vodka, Kahlúa and chai), Sparkling Hibiscus (hibiscus tea with sparkling wine) and Orange Blossom Mojito. All three were perfect, though the Russian—a spicy and sweet cocktail—was by far the best.

The kabob was simply spiced, paired with red onion, bell peppers and a plain yogurt sauce. Uniquely accompanied by a collection of currants and raisins, its only drawback was the chicken’s dryness.
The eggplant parcels—ricotta- and mint-stuffed slices of eggplant—had a mint flavor that sailed in like an afterthought. The sundried tomato tapenade was a welcome addition, if only because it lent the dish a bit of pizzazz . Garnished with toasted pine nuts, the textures were a perfect balance of tender and brittle.

Last, but not least, the tea-brined tenderloin was perhaps the coup de gras. Its skin was crispy, meat tender and moist, and the accompanying sides were appropriately subtle. Fingerling potatoes and roughly chopped carrots soaked in a sauce that merged the richness of Thanksgiving gravy with the distinct smokiness of bacon. Only a tea—the Lapsang Souchong tea—could have produced such a marriage of flavors.

Dessert went down as easily as our dinner. The Tangerine Gingerbread ($5) was piquant and well-spiced if entirely too dry, Flourless Chocolate Cake ($6) was tasty, and Rice Pudding ($4.50) was delicate. I downed bites with a smooth port, ending the meal, as they say, fat and happy.

When considering the trade between Dushanbe and Boulder, it would appear we got the better deal.

303.442.4993
1770 13th Street
Bottom line: Dinner offers the best culinary variety, cocktails are creative and the venue is a destination in itself.