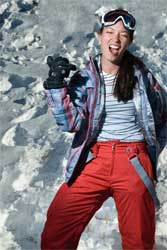 With a map scrawled onto a cocktail napkin we’d received from a waitress the night before, we trudged deep into the Taos Gorge in search of pristine natural hot springs.

After about five miles of four-wheelin’ in my sporty Mazda, complete with six inches of ground clearance, my girlfriend and I found this secret stash—the directions were near perfect.

It was a warm Sunday afternoon as we followed a rocky, but easy, hiking trail for another 10 minutes to find the oasis at the bottom of the gorge—an eight-person, natural hot tub on the bank of the mighty Rio Grande River.

After a few minutes, we had it to ourselves, enjoying the bathtub warm pool while taking in the beauty of the gorge’s craggy walls that shoot straight up a few hundred feet from the riverbank to desert terrain as flat as a drive along I-70 in eastern Kansas.

The geothermal soak capped a day full of Southwestern culture, and an out-of-the-ordinary weekend experience. We shopped the galleries of quaint Taos, ate blue corn pancakes at brunch and stepped back a millennium in time with a trip into the Taos Pueblo reservation just outside of town.

Oh, I almost forgot to mention, we were actually here on a ski getaway.

It’s easy to forget that if you opt to find lodging in the town of Taos, which is about 18 miles from Taos Ski Valley. You’d never guess the two were that close.

Taos is a funky, dusty artists’ town full of Native American culture and Southwestern flair.
The ski area, tucked behind the massive Sangre de Cristo Mountains that surround the town, is nothing short of world class. The lifts may be excruciatingly slow, but skiing Taos still offers one of the best winter experiences in the west. The folks are friendly, the parking lot shuttles unique (a beastly pickup truck pulls a 20-foot trailer that seems more fit for a fall pumpkin patch ride), and the terrain ranges from mild cruisers to extreme, five-foot wide, 45-degree chutes.

I’ve always heard beaming accolades about Taos with one caveat: With the snow conditions, it’s either feast or famine, to steal a cliché.

Consider us lucky to have experienced the former, as we dropped in during January, a record-setting month for snowfall.

I enjoyed the steep, powder-filled chutes off West Basin ridge. My girlfriend tested herself on the relatively steep black diamonds that didn’t require a hike and the ample cruisers that dodged in between gladed runs.

After five intense hours of skiing without a break (no lift lines will do that to you), we called it a day. We skipped on a few tempting après ski patios and headed back to town—there was just too much on our Taos checklist to waste time drinking and soaking in the warm afternoon sun.

And that is really the only complaint we had on our trip. Because of busy work schedules, we had only 48 hours to spare for the weekend jaunt. That wasn’t nearly enough for two, first-time visitors.
Beyond the skiing, we wanted to soak in the culture that permeates the region. We also wanted to enjoy the natural desert beauty of the area, a stark contrast to the Front Range foothills.

We crammed in nightlife at the historic Adobe Bar of the Taos Inn (where we stayed); ate ox tail at Joseph’s Table—a tasty, albeit overpriced, fine dining restaurant; found great deals on haute art; and enjoyed one of the premier ski areas in the United States (a feeling shared with many avid skiers).
Still, we wanted more.

When I told a friend we were heading to Taos, the former resident of the New Mexico town gave me two pieces of advice: Check the hot springs at the bottom of Taos Gorge and hike up from the top lift and hit some of the chutes and powder.

I’ll add this to his list: If you’re visiting for the first time, take at least three days so you can enjoy it all.

Back to Winter Gear & Getaways