Eldora: Within Easy Reach When You Need to Scratch that Skiing Itch 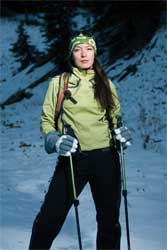 Being a big fan of Eldora is easy.

The little Boulder County ski area that could really does have something for everyone; groomed intermediate cruisers, a terrain park, steep faces complete with huckable rock bands. And while the portions may not be of the Las Vegas buffet gorge yourself silly variety, the goods are always good and sometimes, great.

The March blizzard of 2003 isn’t a good example because even though more than six feet of snow fell at Eldora over two days, it was impossible to enjoy the largess. Avalanches closed the Ski Road that left the resort cut off from me and the rest of the world for three days and. Earlier in the epic day, I watched as a woman foundered in waist-deep snow and then fell over about 75 yards from the Challenge Lift. Ski Patrol had to rush to her aid. But on days when the bigger snows hit, Eldora becomes a curious place. I’m never far behind the storm, making the drive up from Longmont as quick as my snowtires allow.

With two feet of fresh on the ground and the parking lot packed with cars, I often find the lift line mazes empty. This is because many season pass holders use the lifts to bring them to the back country. Most ski areas start the season with big announcements about opening new runs, adding a fast new lift or expanding their terrain park. It’s as if they are afraid that skiers and boarders will forget about them unless they add something new. New this year at Eldora: Remolded women’s bathrooms and a newNordic Snow Cat groomer for the popular cross-country trails.

Eldora doesn’t need a “new-and-improved” gimmick: It has proximity and little traffic to battle on the 21-mile journey up the canyon from Boulder. And because of the state-of-the-art snowmaking system at Eldora, gone are the days of horrific conditions; as long as it’s cold, it’s good. But on those days when Mother Nature gives the Front Range a wink and a nod, Eldora is nothing short of epic.

You can even turn the short trip into a long weekend if you want to kick back for a few days. Check out the historic Goldminer Hotel, about a mile past the Lake Eldora Ski Road in the old town of Eldora. Room and lift ticket packages start at $200 per night.
I usually head back down the hill, but regardless if you stay the night, you’ll want to slug down a cold PBR on tap and great cheeseburger at to the Pioneer Inn in Nederland—or PI as the locals call it. Once the only decent hangout for musicians recording at nearby Caribou Ranch, the early 70s saw stars like Joe Walsh, Chicago, Stephen Stills, Dan Fogelberg, Three Dog Night and Tommy Bolin turn the scruffy tavern into a jammin’ hot spot. The PI’s classic rock heyday has moved on. Luckily, the food and atmosphere are still going strong.

And the same can certainly be said for Eldora Mountain Resort as well.

Back to Winter Gear & Getaways