The Survivors Guide to a Recession 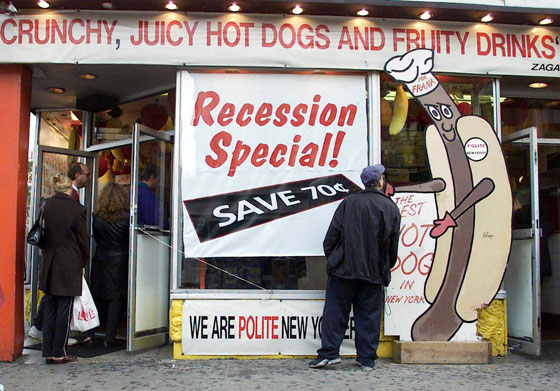 1) Maximize Your Exposure
Be mindful of circulation compared to ad cost. Make sure the product you are advertising in is in fact something people read and aren’t throwing away. If you have a limited budget make sure your ad is being seen by as many people as possible. Be careful of declining medias, which is to say don’t be lured by the old standby. Mediums have changed over the last 15 years; make sure you aren’t using a 20-year-old plan.

2) Maintain a Steady Marketing Plan
As long as your doors are open for business, you need to continue to market. In a study of U.S. recessions over the last 100 years, research shows that businesses that maintained or increased advertising averaged significantly higher sales growth for the following three years than those that eliminated or decreased. Many of those businesses that stopped advertising wound up shutting their doors. Maintaining brand recognition should be considered as an on-going business investment. The moment it stops—it begins to lose power immediately—future sales are in jeopardy. Studies show that it takes four to six months to see the results of an advertising program. Cutting back during a downturn is like throwing away your investment. Maintenance today costs much less than rebuilding tomorrow.

3) You Can’t Cut Your Way to a Profit
Expense management is done at all times, not just in bad markets. Cutting expenses in bad times is a misnomer. It’s like taking Tylenol for a heroin addiction. Be selectively extravagant and prudently frugal.

4) Don’t Buy into the Emotional Roller Coaster
Unless you plan on shutting your doors, maintain a steady focus on what made you successful in the first place.

5) Make the Bad News Good
Use all the bad news and the fear and negative emotions associated with it to your advantage. Use the headlines in your marketing and advertising and become the solution provider.

If we could guarantee you a larger audience for a better cost right now when maximizing ad dollars is crucial, would you consider that important?

Here at Yellow Scene Magazine, we know that everyone is fighting to make sure our businesses not only survive but succeed during this year’s ups and downs. Since our inception eight years ago, we have invested enormous amounts of our budget to guarantee the largest audience in the 14 communities that make up the North Metro/Boulder County Region. For years we have, and will continue to, provide the largest distribution of any publication in the area.

Experts advise that it is more important than ever to maintain a strong marketing presence in order to survive and come out as a leader in the marketplace. That is why you want to be extra careful not to waste precious advertising dollars in the wrong places. Yellow Scene Magazine has not only the largest distribution but the most efficient way for you to reach your customers without waste. With a 95% pick up rate, we average a 5% throw away rate. No other publication in the area can come close to that kind of following of readers, with most averaging a 15% to 35% throw away. Many paid publications average a 50% throwaway rate at newsstands! With a circulation that is double to triple that of any other area publication, Yellow Scene Magazine allows businesses the most powerful way to make sure their message is visible to one of the country’s most desirable audiences.

The Boulder County and North Metro area is one of the most affluent, educated and fit in the state. We make sure to provide a product that appeals to these residents lifestyle with exhaustive coverage of local arts, entertainment, news and culture. Our magazine has earned the reputation as the source with their finger on the pulse of the community.