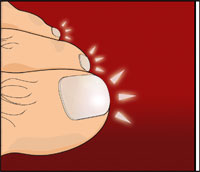 One of the many lessons life has taught me is that the rewards of a good foot rub are legion. Getting one is an unmitigated pleasure anytime. Getting one at the end of a day spent hiking in the backcountry with a 60-pound pack on your back imparts the hope, fortitude and will to get up the next day and keep walking farther away from the civilized trappings of hot water, vehicles and grocery stores.

I’ve done a lot of (what I consider) gutsy things in my day. They include talking extemporaneously to an auditorium full of people, skiing off a rock band without first scoping out the landing and taking a “shortcut” down a cliff via the tops of some 100-foot-plus tall trees. But none of those compare to the sheer terror I felt walking into Boulder’s Star Nails and asking to get a pedicure.

The four or five other women in the shop in various stages of getting their nails done (toes and fingers) paid me little attention as the Vietnamese woman who greeted me reached for the gift certificates in response to my request for a pedicure. But when I said, no, it was for me, heads turned in unison and an excited chatter in foreign tongue ensued.

With surprise and delight, the young woman installed me in a massage chair and filled the foot Jacuzzi with warm sudsy water.

The combination of having heated, vibrating rollers pulse up and down your back while someone scrubs, cleans, trims and files your feet, toes and toe nails is brilliant. But add an earnest foot rub and lower-leg massage, and the result is a half hour of top-shelf livin’.

The other women in the room kept constant watch of my reaction to each step of the process. My obvious enrapture during the foot and calf massage prompted the woman to my left who was getting paint for her toes to say “I guess the secret is out. I don’t think we’ve seen the last of you.” No indeed; this kind of pampering and pedi-pleasure is worth all manner of snickers and surrender of perceived masculinity.
Ahh, but my response to the punch line of this treatment earned me the respect and smiling nods of approval from the estrogenettes in the room.

“What color would I like?” the woman asked, completely unable to grin about putting me on the spot.

“I’ll take a French pedicure, thank you,” I replied, having done my homework and knowing that a good buffing sans polish was—absent declining any finish at all—the most masculine out possible.

In the years since my pedi-ephiny, I have quested for the best I could find—thorough callus removal, painless nail trimming and filing and most important: strong, vigorous foot and lower leg massage.

But all this self-pampering has paid other dividends as well. Over time, getting a good pedicure allowed me to give them as well. This earned me massive kudos with a girlfriend who had joined me on a seven-day trip into the backcountry.

This tough woman spent the first day hauling a load that weighed about half of her weight of 103 pounds. Toward the end of the day, crankiness ensued so I called for a break and demanded she remove her boots. After airing those dogs and giving them and her calves a deep, patient rubbing, her mood did an about-face. That such attention was from then on expected at the end of each day but was a small price to pay for ensuring that our outing was fun and enjoyable.

So guys, get a pedicure. Anyone who mocks your manhood for doing so will be shown the error of their pre-Cambrian thinking when they see you holding the foot of a grateful and satisfied woman. If nothing else, your reputation among the opposite sex will spread like wildfire.