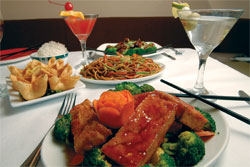 Three or four regulars hugged the back corner bar, hovering over luminescent cocktails. Every odd one featured protruding umbrellas, while each sip warranted a comment on the day’s news. Coming from the parking lot, we’d stumbled in the back entrance, walking into Lui’s Wok & Grill quaint lounge section.

Bumbling and lost as we looked, though, worked out to our advantage. Lui himself greeted us effusively, ushering us in to sample our own umbrella-studded cocktails, or else to huddle in the back and nibble on an appetizer. We were after something more substantive. The dining room, he gestured, was in the front.

The sequel to Lui’s (you may remember the original, an Old Town Erie favorite that closed more than a year ago) is a hard one to peg. The walls are tastefully decorated with Asian-themed paintings though remain a bit clinical. Situated in Erie’s newest open-air shopping center, it seems lonely. The new development is still under construction and has many vacant storefronts. Perhaps Lui’s successful relaunch will expedite the growth. It is very good but needs to work out some kinks before it becomes great. For starters, its servers should simply serve. We were attended to by a share-too-much server. Her uniform didn’t match her shoes, she told us. Despite our general apathy to her comments, she informed us she favored comfortable red clogs over something a bit more…black. Her makeup, she announced, made her look like Marilyn Manson. This made for several moments of messy politeness.

As the evening unfolded, so did a general ease. Our effervescent cocktails were conversation pieces, offering a perfect segue into the mounding portions of food delivered without pomp or circumstance.

We started with the ubiquitous cream cheese wanton passes. From restaurant to restaurant, this appetizer ($6) seldom varies. They are tasty, but just wontons filled with cream cheese.

It’s the rest of Lui’s menu, including a plentiful helping of vegetarian options, that shines. Fried rice, lo mein, chow fun and the like dot the menu, along with the ever-popular Buddha’s Delight ($10). In the spirit of adventure, one of my dining compatriots went a little afield, ordering the quizzical Tofu Grand Marnier ($10) while the other stuck to the tried-and-true with a plate of Vegetable Lo Mein ($8.50). The latter was salty, and smacked of the iconic corn starch thickener that marks many Asian restaurants. Still, it was satisfying. The Tofu Grand Marnier was a pleasant detour, if only because one would never think to pair orange liqueur with tofu in the context of Asian cuisine. It was a rare balance of sweet and salty.

As a side note, I will say it sometimes pains me to dine with vegetarians; I feel the burden to order meat-heavy dishes to balance their vegetable-laden entrées. Woe is me. Plagued by this, I threw all conservative tendencies to the wind and ordered the Gwinjin with Chicken ($14), a Lui’s signature that features wok-seared meat and vegetables with the volleying flavors of wine and brown sugar. It seemed hardly a variation on any number of combinations with brown sauce. Still I laud its taste. Usually, I can’t finish the Brobdingnagian portions hefted out in pan-Asian restaurants; this go round, I inhaled every last carrot and nubbin of chicken. When prepared like this, Asian food is remarkably comforting.

It seemed appropriate, in our happy dining stupor, to bound out the back by the bar to see what Lui was up to. Craned over his own rainbow-tinged highball glass, he peered at us. Beaming a smile, he ushered us out the door with a handshake, along with a welcome to return with friends any time. Despite the fact that the entire shopping center seemed asleep by the time we left, Lui’s in and of itself is a lively spot worthy of a return trip.