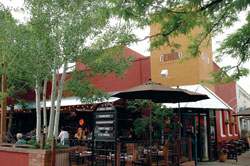 “This is my old stomping grounds!” my friend shouted to me as I slid into the seat opposite her at Centro Latin Kitchen. “I used to get drunk here all the time when it was the Samba Room. And I broke my tailbone across the street at Bart’s CD Cellar.”

Struggling to be heard over the hustle and bustle of the busy Latin eatery and bar, the two of us reminisced about the days when the west end of the mall was completely dead and how much it’s changed and evolved. It’s become an area that’s chic and urban, complimentary and supplementary to the mall that once overshadowed it.

Centro isn’t a big place, with small tables fitted into a long, narrow dining room and a very cool bar, the back side of which opens onto the patio when the weather is nice. Unfortunately for us, it was stormy out, leaving the bar closed off and the room loud and stuffy.

We were intrigued by the menu, a stimulating play on Latin favorites with unusual ingredients. Our attentive server brought our drinks and appetizers: a salsa sampler that came with a sweet and spicy habanero salsa, a smoky chipotle and a fairly watery chile verde as well as an order of ceviche. The salsas were bright, fresh and flavorful. We had fun trying them in different combinations as our server suggested, but I was a little put off by the price tag (it worked out to about a dollar a tablespoon). The ceviche seemed a much better bargain with large chunks of expertly marinated fish coated in something akin to a cilantro pesto and partnered with green olives. The olives at first gave me pause, but they worked, and I resolved to trust chef Ian Clark.

A good thing, too. My friend snickered that we were lucky we aren’t picky eaters as she pointed out a line on the menu explaining that all the ingredients were essential to each dish and insinuating that special orders would be frowned upon. She ordered the chicken and goat cheese enchiladas and I decided on the duck carnitas tacos.

The enchiladas were a little dry; having spent a few formative food years in New Mexico, I expect my enchiladas to be swimming in sauce barely contained by the confines of the plate. But the spices, chicken and cheese were a great combination, and we loved the black beans that accompanied the dish. The duck tacos were brilliant, reminding me happily of Mexico City-style street tacos I enjoyed while living in LA. Two perfect corn tortillas topped with a pile of shredded duck carnitas, lightly dressed shredded cabbage that gave it a dose of crunch, a few crumbles of smooth cheese and some luridly pink pickled onion. The sweet and sour and spicy flavors melded beautifully until I was wishing I hadn’t eaten quite so much ceviche and saved myself for the main course.

My trust in Centro’s chef was not misplaced; the food was excellent, creative and fresh.

And while our service was attentive and friendly, I found the atmosphere left a lot to be desired. My friend and I ended up at a coffee shop down the street to finish our evening because we were tired of shouting over the din of the loud music and noisy crowd. Maybe if it had been a different kind of evening we might have enjoyed some drinks and small plates at the bar before heading out to go dancing or to our next step on the pub crawl, but as it was, it was a challenge even holding a conversation without shouting.

Good thing we had great food to occupy our mouths.