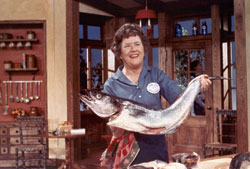 It was my father, the Austrian-born anesthesiologist, who turned me on to Julia Child, and not Mom, who did all the cooking. I would hear him laughing in the TV room and go in to find out what was so funny. I couldn’t believe he was watching a cooking show. Heck, in the 1960s, The French Chef was the only food show on our black-and-white Zenith.

But it was clear Dad didn’t care about the cuisine particularly. He thought of Joooo-leeeee-ahhh as a talented and hilarious stand-up cooking comedian.

All I knew at that point was that Julia made food and cooking a fun adventure. Perhaps she was the early spark that eventually led me to a culinary career.

Decades later when I finally encountered Julia Child in the flesh at a luncheon at Denver’s Wellshire Inn, I was awestruck, but she couldn’t have been more “aw shucks” about her celebrity status. As the Daily Camera’s food editor, I got to see a lot of Julia and interview her while covering the Aspen Food & Wine Classic where she was the biggest draw at that then-obscure little event.

In her later years, she would shuffle onto the cooking demonstration stage, shoulder’s deeply hunched and looking quite elderly. Could she still pull it off, we sadly wondered? Then she would turn on her mic and herself. She’d pick up a chicken and become magically transfigured into the familiar, dynamic, icon who always concluded with a hearty “bon appétit.”

The last time I saw Julia in Aspen, I did something that I almost never do as a journalist: I asked for her autograph. I told her I’d never cooked her recipes because I don’t usually use recipes, but I deeply appreciated what she’d done for the American palate. She asked me who the signature was for. “It’s for me,” I said. That notebook cover bearing the words “For John, Julia Child” is among my most precious keepsakes.

Dad was always supportive of my career and a little mystified about my choice. But he was never more impressed than when I showed him the autograph.

“She was Julia, just like on TV,” I said, “except much taller and really funny.”

He broke into a huge smile.

Openings
In last month’s column I noted that chef Bradford Heap’s second eatery in the longtime Tom’s Tavern space would be called Terra. Actually, the name is Salt and it should be open by the time you read this. More details next month.

Closings
Spud Brothers, the single-minded potato-centered eatery, has closed at 2010 10th St., in part because it was barred from staying open late when those with, um, strong French fry cravings were likely to be out and about.

Coming Soon
Sprouts Farmers Market will jump in the already crowded Boulder County supermarket scene when it opens a Boulder store in early October. The site at 2950 Baseline Rd. was formerly a fitness club and before that, Boulder’s Coast, a club featuring national acts including the young Lyle Lovett. A second Sprouts is planned for the former JCPenney space in Longmont’s Twin Peaks Mall. Meanwhile, Longmont’s Cheese Importers hopes to open a second cheese and gourmet food retail outlet in Lafayette near the new Cheese Importers wholesale facility.  Coming up: Agave Mexico Bistro and Tequila House, 2845 28th St., between Jimmy & Drew’s Deli and Sabor a Mexico Panaderia.

Food for Thought
“I guess I’ve always been a food obsessive, and it has gotten worse the older I’ve gotten. I don’t think any day is worth living without thinking about what you’re going to eat next at all times.”—Nora Ephron, writer/director of the film Julie and Julia in Gourmet.