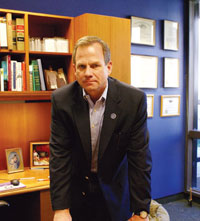 Boulder County District Attorney Stan Garnett laughs when he discusses what is arguably the most talked-about issue of his first eight or so months in office.
Of course, if you read the papers, you know that it has nothing to do with a cold case or DNA or term limits but with a social media phenomenon known as Twitter.

“To tell the truth, if it had a less ridiculous name, it wouldn’t have been that big of a deal,” Garnett said, sitting in his Boulder office, looking casual in jeans and
a blazer.

It all started when Garnett’s son told his dad to get with the times—to diversify his communication repertoire with some social media. He started Tweeting about cases in June, and then made local and regional news as well as the Associated Press wire when he was given permission from a judge to use Twitter during the murder trial of Kevin Elmarr.

“I got calls from around the country about it,” he said. “Mostly friends making fun
of me.”

Despite the buzz, Garnett is more than just a guy who sums up his thoughts in 140 words or less. Here, he talks about white-collar crime, term limits and being the DA in Boulder.

Term limits: Garnett is pushing to extend DA term limits from two four-year terms to three. He’s one of multiple Colorado DAs asking for term-limit extensions; Colorado is the only state in the country that restricts DAs to two terms. “It’s really about the office, and it’s really good for the office,” he said, noting that it can increase stability and consistency for various projects and cases.

Garnett on Boulder: “It’s where everyone has an opinion about everything, and they have time to tell you about it.”

White-collar crime: Because Boulder County has an older and upper-class population, the residents are more at risk for Ponzi-type schemes, Garnett says. This fact inspired the DA to open a white-collar crime unit. “As people get older, they don’t rob each other as much and they don’t beat each other up at bars as much. But at the same time, you get people who are unscrupulous, who can find people to prey on.” Garnett expects it to take years to see through some cases but they have already started reaping the rewards, so to speak, with cases going to trial his fall and winter.

Garnett on his office: He also made headlines for making some changes to the office staff, with some prosecutors leaving or being asked to leave. His goal: “To strike a balance between invigorating the office and respecting its culture. …I want an office that takes cases in front of the community and is not afraid to get a jury’s verdict. That means sometimes losing cases. But it’s out in the open and not a plea bargain behind
closed doors.”

Twitter: Truly, on this social media outlet, there are leaders and followers. Garnett has 150 followers and follows fewer than 10. “It’s because I don’t want to look like a teenager,”
he laughs.