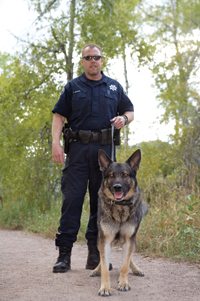 The officer-K9 relationship is something special…even after the pooch hangs up his badge.Andra Coberlyby Andra Coberly / photo by Jenifer Harrington
Published on: September 20th, 2010

Sgt. William Manes now leaves his dog at home. Which—seeing as he grew up with two blind parents who depended on seeing-eye dogs; seeing that Manes was one of the first K9 handlers in the Fort Wayne Police Department in 1976; and seeing that he has worked with five dogs over his more than three-decade career in law enforcement—must feel pretty darn odd. But the supervisor and trainer for the Boulder County Sheriff’s Office K9 Unit is handling the retirement of his bomb-sniffing dog just fine. He’s still in the nitty gritty.

But it’s Chewy who has a problem. It’ll be a change for the German shepherd, who was once depended on to sniff out explosives in the line of duty.

“I put on my uniform to leave, and it bothers him. He doesn’t understand why he can’t go,” he says. “There is no retirement program for the dogs. That’s the way it is. The dogs get the best of care while they are working, and when they retire, they become a normal pet in the officer’s home.”

For the officer, that’s part of being in the K9 unit. You take the dog home with you at night, and the pooch retires to your couch once his or her days in blue are over.

“He is a member of the family,” he says of Chewy. “It’s interesting, at home you don’t really see what they can do. They are jumping up on things and the kids are crawling all over them. They change when you get them in the car. They are all business.”

Business indeed; these dogs are not simply furry friends that bark on command. The Boulder County Sheriff’s Office K-9 Unit is the second longest-running unit in the state, and every law enforcement agency in Boulder County depends on the unit for everything from tracking missing people and finding evidence to dangerous apprehensions and detecting explosives or drugs.

Most of the towns and cities within the county’s boundaries have no police dogs, so the Sheriff’s team responds to cases all over the area and even into Denver. The unit’s five dogs, including a bloodhound named Sally, are on call 24 hours a day, seven days a week. They have specialties—some are drug or bomb-sniffing dogs and Sally tracks missing people, criminals and even lost hikers—but they are all dual-purpose animals that do both detection and patrol work. They average about 500 cases a year.

“We share the wealth,” Manes says. “If Gilpin doesn’t have this tool, and they need it, we go.”

Manes believes in the idea of the working dog—whether it’s a service dog for someone who is blind or a bomb-sniffing dog named Chewy—but for himself and for other officers, in and out of the line of duty, the dogs are not simply tools.
“You ask anyone with a dog who they depend on,” he says. “They get very emotional. Any officer is just like that. Everyday in the car, that dog is sitting with you, watching over your right shoulder. Your life depends on them at times. You can’t believe it. It’s amazing that this four-legged critter can have such an impact.”