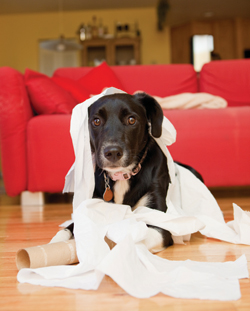 In early February of this year, my husband and I finally made a decision we had been mulling over in our minds for quite a long time: We decided to add a new member to our little family. This wasn’t a decision we entered into lightly. We considered the financial and time costs; we considered the messes, the frustrations that would be involved; we realized that we were talking about an 18-year commitment. And yet, the yearning we felt in our hearts wouldn’t be satisfied by any of these logical arguments.

We found her at a PetSmart in Thornton after spending the entire day driving from one place to the next, looking at the dogs available on that national pet adoption weekend. We had driven all the way out to Brighton looking for a shelter I’m still convinced doesn’t actually exist, and we decided to make one last stop before going home.

She was huddled in the back of a crate wearing a purple ribbon around her neck. As we approached, her tail with the little white tip that looked like it had just been dipped in paint thumped loudly against the floor, but she remained curled in a tight ball as far away from us as she could manage, watching us all the time. The volunteers from Every Creature Counts handed us some bacon-flavored treats and encouraged us to try to lure her out.

We sat on the cold tile floor and held out our hands to her, cooing and cajoling, and slowly, slowly she crept forward. At first, she came just far enough to snatch the treat from our hands before retreating. Then she stood just inside the doorway of the crate; finally, she put one paw out, then another, always close enough to scramble back into the safety of the crate if we moved too fast or if a loud noise startled her. We talked as we tried to get to know her: she clearly needed a lot of special attention, but she was so beautiful, so sweet. There was so much soul in her big brown eyes.

Wendy, the Every Creature Counts volunteer, was nearly overcome with emotion when we said we wanted to adopt the shy little black and white puppy. She had doubted this particular puppy would be adopted, because she didn’t think anyone would take the time to get to know her. As we filled out paperwork, we were told how these dogs had been rescued from shelters in Mississippi, where they had been slated for euthanasia. She had likely spent her entire six months of life in a shelter.

We named her Bella.

The euphoria of finding a puppy quickly gave way to uncertainty; it didn’t take long for us to realize that we knew exactly nothing about training a dog. Despite the fact that we’d both grown up with dogs, the training had never fallen to either of us—and we had no idea how to get her to do what we wanted. Those first two weeks were insane. There was a lot of peeing on the carpet. There was the fact that Bella seemed to be afraid of the back door. There were several very scary moments when she growled and snapped at other people and dogs. My husband yelled, I cried, and we both wondered aloud why we’d ever wanted a dog. I distinctly remembered that Every Creature Counts would take Bella back, for any reason, without question. And yet, through the haze of urine and growling, of barking at nothing and stubbornness that seemed to well up from the very depths of her soul, I couldn’t even begin to imagine giving her away. We started calling her our “special needs” puppy.

Luckily, one of the stipulations of our adoption was that we sign up on the spot for a training class at PetSmart. On the first day, we had to carry Bella through the sliding doors because she was too afraid to walk through them on her own. We made our way into a room with seven other dogs and owners, and she proceeded to cower under my stool—that is, until the Great Dane mix next to us wanted to put his head in my lap, and then she made it clear that she would rend him limb from limb. She was afraid of the clicker that was supposed to mark her good behavior and she was totally uninterested in any of the food treats we offered as rewards. It was a very long first session.

But, time passed, and with a lot of practice, we began to improve. It became clear to me that dog-training classes are a lot more about people training; once the human knows how to ask for what she wants, it takes the dog almost no time to learn to give it. To our utter amazement, once we began asking in ways she understood, Bella learned to sit, to lie down, to stay, even to “leave it” and “drop it.” Her confidence grew by leaps and bounds until she was almost excited to go to class and see the other puppies.

Last month, we celebrated Bella’s first birthday by giving her a new soccer ball (she had torn her previous one to shreds). We still have a long way to go; “come” is something she does only when she feels like it, and staying for more than about 15 or 20 seconds is a skill she hasn’t mastered, so we’ve signed up for some more classes with Two Bears to hone those skills. But we’ve passed the scary, uncertain time. The three of us have fallen in love, have realized that we don’t want to even consider a life without the others, and have come to accept that there’s nothing we can’t accomplish with a little training.