The Fateful Freedom of Tim Masters 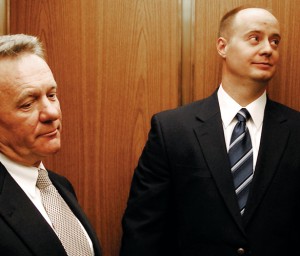 In 1999, Tim Masters was wrongfully convicted of a disturbing murder in Northern Colorado. After almost 10 years behind bars and a lengthy, headline-provoking trial, he was eventually released based on DNA evidence. He learned to use a cell phone and rejoined his family, but Masters’ newfound freedom has been anything but easy. Greg Campbell tells his story.

At the beginning of the new year, Cornelius Dupree, Jr. was released from a Texas prison after having served 30 years for a crime he didn’t commit. Many have commented on his apparent lack of bitterness and anger as he addressed the media outside the courtroom.

“I must admit there is a bit of anger, but there is also joy, and the joy overrides the anger,” he told reporters. “I’m just so overwhelmed with the joy of being free.”

What Dupree will probably learn is that in the months and years to come, the joy will eventually fade. The anger may not.

If there’s anyone who understands what Dupree is feeling now and will probably feel later, it’s Tim Masters. Three years ago this month, Masters walked out of the Larimer County Courthouse a free man after spending nearly a decade in prison for a Fort Collins murder he didn’t commit. Like Dupree, advanced DNA analysis proved what he’d maintained since he became a suspect in Peggy Hettrick’s murder in 1987, when Masters was 15: That he was innocent. Masters was overwhelmed by freedom and the advancements of society—everything from dialing a cell phone to reuniting with his family was mind-blowing and joyous.

But Dupree may also learn the lessons that Masters has in the past three years. For the wrongly convicted, obtaining freedom is unquestionably the most important step in rebuilding a life. But it’s only one step of many. Complexities range from trying to find a job to finding friends to finding someone to make a family with. Masters is still finding his way through many of those issues, while also trying to come to peace with his experience.

When Masters was freed, he had no friends outside the prison walls other than those on his legal team. He had no job and no belongings except what his family had kept for him in the hopes that he’d one day be free to use them. Immediately after his release, he survived on charity—once, while eating at Taco Bell, a woman who recognized him from the news handed him a check for $100. Attempts at odd-job careers, like getting into the storage-shed auction business to sell the contents on eBay, barely paid the bills of modern, everyday life, like rent and groceries.

“‘Normal’ for me would have been going back doing what I was trained to do,” says Masters, who worked in the aircraft maintenance field when he was arrested, a skill he learned in the U.S. Navy. “That was never going to happen. If I apply for a job and they go through a background check on me, even though my criminal record is clean, there are so many databases in this country that companies use for background checks that it’ll still pop up. Conviction, first-degree murder. …The future was looking pretty bleak.”

Inevitably, he faded from public view as his own role in his case came to an end. Still, the fallout from his wrongful conviction continues to make headlines three years later. District Court judges Terrence Gilmore and Jolene Blair, the prosecutors during Masters’ 1999 trial who were accused of withholding potentially exculpatory evidence from the defense, were at first censured by the Colorado Supreme Court for “impairing” Masters’ right to a fair trial and failing in their duties as lawyers. Then they were voted off the bench in November’s election, the first time in state history two judges were ousted in an election.

Once-respected Fort Collins Police lieutenant Jim Broderick, the cop who built the case against Masters and who was instrumental in sending him to prison, was indicted over the summer by a grand jury on eight counts of felony perjury allegedly committed during Masters’ case. Broderick faces up to 48 years in prison if he’s found guilty. He’s been suspended from the force, but the city is still paying his $102,000 annual salary and paying for his team of defense lawyers. His trial is pending.

Early last year, Masters was paid $10 million by Fort Collins and Larimer County to settle a wrongful imprisonment suit he’d brought against them. The settlement solved his employment problem, promising if he manages his money, he’ll never have to worry about applying for a job again. He invested much of it, used some to buy a 1910 farmhouse in east Greeley that he’s restoring room by room and has been quietly buying up other property in Greeley to turn into a modest rental housing business.

But while the money has been useful for easing his mind about making ends meet, it’s done nothing to pay him back for the years he’s lost. It’s had an unintended consequence that’s made it all the more difficult for him to assimilate back into daily life—already understandably distrustful of others’ intentions, it’s led him to build certain protective barriers, both physical and emotional. The settlement was widely reported in statewide media and Masters asked me not to be very specific about where he lives, out of concern for his safety. Those fears manifest in some of the house’s details—a tall fence, outdoor surveillance cameras, a security system that includes motion detectors in some rooms, and a pack of Rottweilers who are friendlier than they look.
Masters has become so wary of people’s motivations that he’s become something of a recluse. He doesn’t leave the house much and he’s made few friends since his release.

“My personal life, there’s pretty much nothing going on,” he says. “You never know if somebody wants to become friends with you because they know you have money and they think you’re going to take care of them or if they like you as a person.

“I don’t feel like I’m very good at communicating any more,” he continues. “I tried not to make too many friends in prison. I didn’t socialize much in prison. So I feel like my social skills are pretty lacking now. It was intentional on my part. I didn’t want to make a whole lot of friends in there. I just find that I’m a lot quieter than I was before I was arrested. As a kid I was quiet also. But after all those years in the Navy, I was in charge of a shop and I found out that I enjoyed talking to people in there. By the time I was arrested, I was a little braver about talking to people I didn’t know and I enjoyed having conversations.”

When it was clear that Masters was going to be released from prison, his lawyers told me one of their priorities was to get him into therapy so he could learn to cope with what had happened and to learn to define and work toward having a “normal life” going forward. Masters only went to one session.

“I went through 10 years in prison for a murder I didn’t commit. I had my childhood screwed up from the age of 15 on,” he says. “What are they going to do to help me? It’s done. You can spend all of that money just to go down there and bitch to them when I have family who are perfectly willing to listen to me bitch for free. …I’m sure it does help some people, but I don’t think it would help me.”

There’s little question that Masters still feels the sting of resentment and anger about what he’s been through. The one thing that could have helped, the cheapest and easiest thing those involved could have done, has never materialized. An apology.

“I’m past expecting an apology,” he says. “It would have been the right thing to do but I think that the people involved are still so arrogant that they won’t admit, even to themselves, that they made a mistake.”

As for his future, Masters has a book contract and has been busy writing his story in his own words. But beyond that, his plans are less concrete.

“I’d like to have a wife and kids but is it going to happen? I don’t know,” he says. “I’m not out there socializing, so it’s not easy to meet people if you’re not socializing.”

Despite the hurdles, he hasn’t lost his perspective. As he knows, it could be worse.

“Things are going better than they were three and a half years ago. Hell, even a year ago,” he says. “After all I’ve been through I’ll just be happy for whatever I have.”