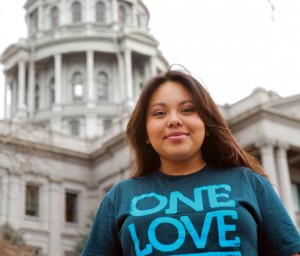 Ana Temu is a fighter. In the past 18 years, her father was put in prison on a murder conviction, her mother has grown weak and medicated because of a life-threatening, long-term illness. She has suffered internal conflict and experienced personal traumas.

But for the senior at Boulder Preparatory High School, her past has made her confident and ready to fight through even the most thorny of battles. What she has overcome has become her armor. Temu says growing a grassroots movement and causing social change is not so intimidating.

“Working for social justice is very time -consuming and stressful. It takes so much energy. You need to be strong,” Temu says, calmly and thoughtfully. “My past made me see how strong I can be in situations of panic. It gives me strength. It built me up.”

Along with studying and preparing for college, Temu is a volunteer for social justice programs focusing on immigration issues: She’s a youth leader and board member for Longmont Youth For Equality; she’s worked on campaigns for Mi Familia Vota (My Family Votes); she is a key youth leader for the Colorado Immigrant Rights Coalition; she’s working on a guidebook for Voices of Immigrant Children for Education to educate students, teachers and counselors on helping undocumented students attend college. She spends time at the state Capitol and in Washington, D.C., lobbying for or against specific bills, including the DREAM Act and civil unions legislation.

Becoming a part of a grassroots movement for change, Temu found herself—both literally and figuratively—holding a megaphone. And she likes it.

“It’s brought a confidence to speak in public,” she says. “It’s an opportunity to use my voice. I can be in any situation and have a sense of security. A lot of people don’t have that security. I should be out there for those who can’t.”

Temu has seen a spectrum of how Latinos are treated in America. How difficult it’s been for her mother, who sought asylum in the United States during the Guatemalan civil war, to receive the right treatment and medication, and how her step-father, who works in agriculture in the summer and finds odd jobs the rest of the year, comes home worn and weathered from working in the sun all day. She also sees her friends who have gone to college and are thriving with exciting careers.

Temu, who hopes to attend CU next year and major in ethnic studies, business or political science, says her peers are continuing the spirit and message of the civil rights movement in the 1960s: “We are just molding the movement to the issues that are urgent now,” she says. Like many of the social justice movements of the past, hers is one made up of young people.

“To me, there are so many of my friends doing this kind of stuff, it’s normal,” she says. “It’s good to see that kids are having a movement for social justice. In the beginning, I would recruit all my friends to come. Now, they are all in the movement.”

Temu realizes what she does can impact the entire community, the entire world. She believes in the power of the people, and she knows the potential of a grassroots movement to influence politicians and policy. But more than politics, she says, it’s about tolerance.

“I want people to understand that we are different and that difference is the one thing that unites us,” she says. “Like, none of us are any better than anyone else.”