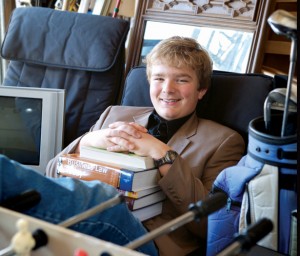 Adam Mathiews was first inspired by the piles of perfectly good furniture CU students left behind in spring. He saw it all as workable, usable stuff, and he also envisioned the couches, tables, skis and clothing as profit.

“I just thought about all the money that could be made,” he said.

Mathiews comes across as a natural businessman and he’s proven himself to be a stalwart entrepreneur. He explains his model: His business has little to no overhead, labor or inventory costs. It’s all profit, and the more stuff he has, the more money he makes.

“It’s all about volume,” explains the 14-year-old who lives in Superior with his mom, Stephanie. “In the beginning, I thought furniture would sell best. But we realized it’s small stuff. Clothes add up.”

Mathiews began recycling, reclaiming and reselling his findings at age 10. From video games and DVDs to Coach bags and nice jewelry to workout equipment, he has found tens of thousands of dollars worth of “garbage”—items on their way to some distant trash pile. Instead of leaving them curbside, Mathiews loads them into his mom’s SUV, takes them home, tests the electronics, assesses all the items, fixes them, cleans them, researches to find their prices and stores them in the basement crawl space or garage. He hosts garage sales three or fours times a year, he’ll advertise some items on Craig’s List, or he’ll take an item to a pawn shop. Though, the latter is a rarity. He has neighbors or family friends who give him things to sell; he’ll follow up with neighbors who’ve had garage sales to see if they’ll give him their leftovers.

For Mathiews, it’s two-fold: He can make some cash (though, he and his mom admit his pricing is often too low), and he prevents lots of stuff from ending up in a landfill.

“It amazes me how much people throw out. It makes you realize how lazy people can be,” he says. “They could have donated this stuff. They could’ve recycled it. …If 10 people throw away one thing, it adds up.”

Looking into the Mathiews’ garage, you begin to understand what he’s talking about: chairs and coolers and lamps and toys. He pulls out three leather coats and recounts how often he finds clothing with the tags still on. And because of that, it’s also a bit of a treasure hunt, one that continues to keep Mathiews engaged and excited.

“It’d be cool to find something historic or something signed,” he says.

His mom admits the business has slowly “taken over” (she lets him use the garage, as long as she can still get her car in) but she’s learned to appreciate her son’s drive and innovation.

“At first, I wasn’t a believer. It was a hobby. I was supportive but not 100 percent on board,” Stephanie Mathiews says. “I realized that he’s learning all these great skills: money management, fixing things, learning how these items work, learning how to negotiate, customer service, communication skills.”

These days, his mom is committed and she’s part of the crew. She takes time to drive him around to see what’s been put out; for Christmas, he asked for and received a few days of driving to look for stuff. Their home is not-so-obviously furnished with Mathiews’ findings: a lovely painting above the couch, candle holders, the doggie bed.

The other benefit, possibly the best, is that Mathiews is learning all about being responsible with money. He’s saving for a car or truck, which he will happily use for his business. He even has a stock portfolio.