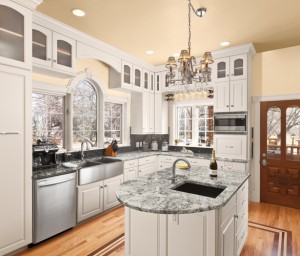 Once upon a time, there was a mouse in a little Longmont farmhouse. One day, the mouse ate a hole in a water pipe and flooded four rooms on two stories.

“I like to design on the fly instead of compose and plan,” said Jefferson, responsible managing officer. “Everything I do is a little Taoist in that we let it take its natural course.”

He said he looks forward to problems and flaws, but usage dominates the bulk of his decisions. This is true whether the family cooks or people cook for them, and whether they entertain, have kids or want to hide the existence of pets.

“Every decision we make is based on how they’re going to interact with it,” he said. “Because they’ll forget everything that happened during construction two days after we leave.”

This farmhouse serves as a secondary home and an entertainment space for homeowners who made their needs clear, Jefferson said.

“They were awesome,” he said. “They picked their finishes in an hour. Usually it’s weeks. …They knew exactly what they wanted, no hesitation.”

Then the homeowners left and were gone throughout the construction.

With otherwise free rein, Jefferson said the design built itself around the homeowner’s needs without forcing them to dwell on smaller decisions. The island and surrounding workspace allow baking and cooking on one side and prep space on the other, creating a flow.

Depending on the time of day, light hitting the island’s countertop highlights gold, silver and rust-colored flecks. Jefferson said these colors helped in picking accent tiles to add to the backsplash and tie the kitchen together. He added a strip of these tiles to a 1-inch space between an oddly placed door and the cabinets, a decision that might have taken homeowners weeks to make, he said. Rare Kitchens designed and built custom cabinets and helped choose special storage features to maximize the utilization of the kitchen’s limited space.

“That way, it’s always exactly the way it should be rather than trying to make something that you bought work,” Jefferson said.

To maintain the cohesiveness of the design, the designers hid the stove hood and refrigerator with matching panels.

“It’s cozy for an intimate breakfast,” said the property manager. “Yet it can still serve 50 people if you need to.”

And it served more than twice that this winter.