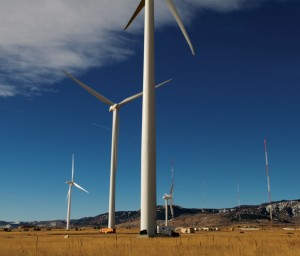 The phrase “new energy economy” started appearing in Colorado media in late 2006, when Bill Ritter began his run for governor. It was a political colloquialism with a romantic bent, and it captured the vision of an ideal future—where industry and environment thrive together.

And when Ritter won the election so did his hopeful idea that Colorado could become a leader in clean-tech manufacturing, research and innovation; that the rooftops of both high rises and suburban homes would be glazed with shiny photovoltaics; that towering wind turbines would protrude from the amber waves of grain and purple mountains majesty.

“Is it ambitious to say we can be leaders in the new energy economy? Absolutely,” Ritter said in his acceptance speech in 2006.

Four years and some months later, the dreams of a clean energy revolution have surrendered to the nightmare of an economic disaster. Millions of Americans lost—and are still losing—their homes, jobs or both. Many industries have gone stagnant, and others have plunged.

Clean-tech and renewables offer one of the few bright lights within the tsunami we call a job market, the industries that Ritter and his eco-elite set out to champion before we knew we needed them as economic drivers. The new energy economy has become tangible—and is no longer the pipe dream of progressives.

“Because of activities on the wind side from Vestas and on the solar side like SMA Solar Technology, we are known across the globe as a hub of activity for clean-tech,” said Patty Silverstein, consulting chief economist for the Metro Denver Economic Development Corp. and the Denver Metro Chamber of Commerce as well as the president of Development Research Partners.

“Of seven industries, the only industry that added employment in 2010 was clean-tech, which is really exciting news for clean-tech companies, which were able to expand in an environment that was obviously very challenging for just about any industry imaginable,” Silverstein said.

According to the report, Colorado has the fourth highest concentration of employment in clean-tech sectors. And average salaries in clean-tech are around $75,000.

The report is not the only evidence clean-tech and other green-focused businesses are doing well in a not-so-pretty economy.

According to the Colorado Clean Tech Industry Association, between 1999 and 2009, the Colorado clean-tech industry grew at an annualized rate of 18 percent—twice the rate of the Colorado economy as a whole. Prior to 2004’s Amendment 37, which continues to increase the amount of renewable energy utilitiy companies need to purchase or generate, there were around 40 solar companies; today, there are 400. Overall, there are 1,500 clean energy companies operating in Colorado.

Many attribute the growth to a mingling of factors: Colorado has research institutions like the National Renewable Energy Laboratory and research universities like CU and the Colorado School of Mines. The state is also centrally located, and sits in the midst of the wind corridor and receives a good amount of sunshine.

“Colorado is, technically speaking, a perfect space for solar,” said Nicole Bertram, senior marketing associate at Abound Solar. “…Colorado has been a good home. We don’t have any complaints.”

A portion of the boom has to do with increasing the state’s renewable standard and other landmark policy; under the Ritter administration, 57 pieces of new energy legislation were signed into law. Another part, undoubtedly, has to do with grants and loans from the federal government to create jobs and train workers. Colorado has received around $19 million in grants to fund programs that work toward greening the workforce.

Tom Morgan is the project director for the State Energy Sector Partnership Grant, a three-year, $5.9 million Recovery Act program that partners with businesses and training providers such as community colleges to—at its most basic—supply businesses with a workforce that is skilled in renewable energy and efficiency fields.

“Ninety-one percent of people who graduated from the program went on to get jobs,” Morgan said. “The only way we can achieve that is by partnering with business. We can’t train people for jobs that don’t exist. A lot of the green job-training programs out there don’t focus on jobs. From our point of view, that doesn’t benefit business or the hopes and dreams of those people.”

The biggest challenge, Morgan emphasized, is finding businesses that need to hire people.

“Honestly, it’s tough. We are not just training people willy nilly,” he said. “We are focused more on the incumbent worker, and that’s a function of the market place.”

Emily Lesh, green jobs coordinator for the Colorado Department of Labor, says one main challenge is ensuring the cart does not come before the horse—or, so to speak, the hybrid cart doesn’t come before the free-range horse. While green industries have fared well, the market still needs to expand. Thousands of people have been employed in green industries, but that doesn’t compare to the need.

“The unemployment rate is hovering at 8 percent in Colorado. There is a much greater demand for jobs than there is supply,” Lesh said. “…Compared to the number of people unemployed, there clearly are not enough jobs.”

The future also looks bright for Colorado’s homegrown companies. Abound Solar just closed a $400 million loan guarantee from the U.S. Department of Energy. Abound will hire around 1,200 employees in the next couple of years. The company, which grew out of a CSU startup, will expand its new Longmont facility into a 200 megawatt plant by 2012.

“We need to hire between 50 to 100 people this year,” said Nicole Bertram, Abound’s senior marketing associate who was recently hired because of the company’s growth. “…We are trying to build the next great solar company. We are creating jobs just from manufacturing the product. We’d love to see job creation based on installation. It’s not just in the manufacturing that jobs are created.”

It’s just the beginning for Abound, and for many other green companies in Colorado; at least, that’s what the optimists say.
“It would be my hope that green business will lead us out of the recession,” Morgan said, earnestly. “You can’t downplay the important role of other businesses. We have a diverse economy. But I think the green economy will be a huge part of it.”

Silverstein said the numbers and statistics are there to support that net-zero-energy castle in the sky.

“As we have been pondering what will be the big engine for future growth, many analysts do point to clean tech as one of those leaders,” Silverstein said. “I have to agree with them. We have only just scratched the surface on how we can more efficiently produce energy and efficiently utilize energy resources, how we can reduce our dependence for oil. I think that it’s important from an environmental standpoint, from a political standpoint and for future generations. We are just scratching the surface on what the future holds.”