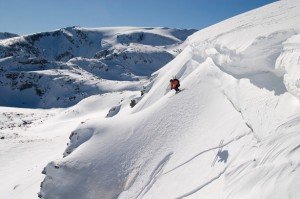 Andy Glossner had just started his turns on Ruby Jewel Bowl when the steep slope began moving. In an instant, he realized he was caught in an avalanche. An enormous white conveyor belt—six feet deep and 500 feet wide—was carrying the 22-year-old down the mountain. There was nothing he could do, nowhere to go. His only reaction was to yell. Unfortunately, no one was around to hear or see him.

Ten minutes before, Glossner had made the decision to ski alone, away from his seven-person group across a ridge. He didn’t tell anyone where he was going.

It was sunny and warm for a March day, even at 11,600 feet. The only thought on the transplanted Pennsylvanian’s mind was making fresh tracks in Colorado snow. To say he was excited is an understatement. As he later admitted, “It was like being drunk.”

Glossner carried an avalanche beacon but had no formal avalanche training, although he and his ski buddies had practiced snow digging drills on their yurt trip in the Rockies west of Fort Collins.

Riding the avalanche on his side, Glossner could see the snow piling up in a gully at the bottom. For a second he thought he might be OK. Then he came to a dead stop with a wall of snow slamming into him from behind. The day’s bright sun quickly faded as snow piled on top, interring him in a frozen tomb.

He was face down, head first down the hill, buried in six feet of packed, heavy snow. Glossner tried moving his arm and his head but they were cemented in place. “I started panicking,” Glossner recalls almost four years later. “Then I told myself, ‘Don’t panic. Breathe normally. Be cool.’” Then he remembers thinking, surreally, “Silly you. This was a stupid way to die.” About a minute later, he blacked out.

Fortunately for Glossner, one of his friends, Andy Vermilyea, was watching the whole drama play out from the bottom of an adjacent chute. He located Glossner within several minutes with his beacon, and along with another skier, dug for about 10 minutes until they found their friend. Blue face. Not breathing. The two furiously kept digging so they could pull Glossner out enough to administer CPR. Just when they got his upper body clear of snow, Glossner popped back to life.

“I remember thinking, ‘I can’t believe you guys found me. I can’t believe I’m alive.’” Glossner admits he was lucky. Lucky his buddies executed a perfect rescue. Lucky because the gully he was buried in is what’s known as a terrain trap—an often deadly part of an avalanche where snow and debris entomb victims. Lucky despite his burial depth. Lucky in spite of himself.

Playing in the backcountry will always involve a certain amount of risk, but you can mitigate the dangers with education, the right equipment and by managing the most dangerous element—yourself.

About 2,300 avalanches are reported every season in the state, according to the Colorado Avalanche Information Center. They estimate that another 10 times that amount occur but go unreported. On average about six people die in Colorado avalanches every year. Among those most often killed are snowmobilers, backcountry skiers, snowboarders and climbers.
Most avalanches occur on slopes that are steeper than 30 degrees. Play on slopes less than 30 degrees and your chances of being caught are remarkably diminished.

Avalanches are fast, up to 80 mph. YouTube videos show skiers and snowmobilers outrunning big slides, narrowly escaping with their lives. But those are exceptions. When you’re caught on one, you’ll likely go for a ride that ends in a cement burial.

Asphyxiation is the cause of death for 75 percent of avalanche victims. Without an air pocket to diffuse your breath, a poisonous carbon dioxide ice mask forms around your mouth, further restricting breathing, leading to hypoxia and eventually a painful death.

One of the best actions to take before the snow cements you is to clear an air pocket in front of your face. You’ll have a 90 percent greater chance of survival if extracted within 15 minutes.

The remaining victims are killed by trauma injuries sustained from being pinballed into trees, rolled with rocks and being swept over cliffs. A small percentage dies from hypothermia.

The three standard pieces of safety equipment for the backcountry are a beacon, probe and shovel. A beacon is a radio transceiver that sends and receives signals to other beacons with the goal of locating buried victims. Probes are collapsible rods—from seven to almost 20 feet—used to probe for a buried victim. Shoveling is the most time-consuming and important part of a rescue.

Carrying this gear should be like buckling your seatbelt: automatic and without exception—the minimum safety precaution. But…

In January, a snowboarder and his dog were killed near Berthoud Pass. The boarder owned safety gear but left it in his car that day. Even if he had brought it with him, it wouldn’t have helped; his buddy didn’t have any equipment.

Several other pieces of equipment are becoming popular additions to the backcountry safety quiver: the Avalung and the avalanche airbag system.

The Avalung is designed to mitigate the chance of asphyxiation. With the Avalung’s mouthpiece, you inhale through a one-way valve while the dangerous exhaled carbon dioxide is expended through a tube on your back rather than near your mouth. It’s simple but effective.

On a hut trip near Vail in 2009, a skier and two snowboarders were caught in a slide. All three used the Avalung while they were buried; one was buried for more than two hours. All three survived.

The avalanche airbag first came into commercial use in Europe in the 1980s. The concept is simple: if caught in an avalanche, pull a cord on your backpack and two airbags will deploy helping you stay on top or at least closer to the surface.

“Burial depth is the big problem,” says Bruce Edgerly, cofounder of Boulder’s Backcountry Access, maker of the Float 30 Avalanche Airbag. “If you get buried shallow, you’re probably gonna make it. But if you get bu
ried deeply, your chances are really poor.”

Edgerly speaks from experience, having been caught in a 1,000 feet vertical slide in 1994. After his buddy dug him out, Edgerly walked out with only bruises and broken gear. “I got away with murder.”

The airbag success rate in Europe—97 percent of avalanche victims survived—makes this a no-brainer for the U.S. The sale and manufacture of airbags have caught on in the U.S. in the last few years. They’re spendy ($700 for the Float 30) but with more companies entering the market, prices should come down. For some, airbags have become a necessity.

In December 2010 near Jones Pass, snowmobiler Kaleb Timberlake deployed his airbag when he was caught in a massive slab avalanche. In a letter to summitdaily.com, Timberlake wrote, “Go get a pack [airbag]. My sled didn’t make it home today, but I did. That is the difference.”

Having the right safety gear can save your life in an avalanche, but you are your best bet to avoid being caught in one.

Read any avalanche fatality report and you’ll notice that many of the victims had at least some avalanche knowledge and were equipped with beacons, probes and shovels. According to Dale Atkins’ research, 72 percent of victims had some kind of awareness training. Atkins was a forecaster at Colorado Avalanche Information Center and now works for RECCO AB, an avalanche rescue detector company. He says the biggest danger is you and the decisions you make.

“The vast majority of people who go out into the backcountry don’t experience avalanches. And it comes down to perception,” Atkins says. “And the problem with perception is it tends to dwell in the past and live in the future but very seldom does it live in the present.”

In other words, Atkins says people only remember what it was like the last time they went out. Things like great powder, good turns and good times—not avalanches that didn’t happen. “They’re employing rules of thumb or heuristics or mental short-cuts to availability. What’s easiest to remember?”

Atkins makes an analogy: When you’re driving, you know if you cross that double yellow line you could get hurt or even killed. Even if you’ve never been in an accident you’ve passed accidents on the road, know someone who has been in one, or heard plenty of stories. But because we haven’t had an avalanche experience, “We don’t know where that double yellow line is. Where that edge is,” he says.

So how do you mitigate these “mental short-cuts” we’re all prone to take? Atkins has a few suggestions:

Keep groups small (four to five people). Because group-think is easy, select a “Devil’s Advocate,” someone who will challenge the decisions of the group. Atkins equates this role to a plane’s copilot who monitors the pilot.

“The Call Girl Principle” is the concept of making all your negotiations right up front. Before your group goes out, talk about the levels of risk each person is willing to take. What factors will lead your group to turn around or take a different route? “The more you can discuss these things before you get up on the side of the mountain, the easier it will be.”

Conduct a “Pre-Mortem” before you ski a slope. Pretend you were involved in an avalanche. “Ask yourself why and how that could have happened? That usually causes us to think backward and start looking at those clues and information a little more carefully. Things we might have missed.”

Two weeks after surviving his avalanche, Andy Glossner took a Level 1 avalanche course. He still skis the backcountry but now knows the danger signs and doesn’t take the risks.

“You were out in the sun avoiding the crowds, no incidents, you come back fine. That was a good day.”