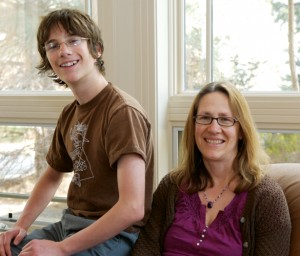 For Micah Wilger, it was sharks and whales instead of cows and hogs—but his family’s path was set to cross Temple Grandin’s from age 3. It was at that age Wilger and Grandin were diagnosed with disorders that make typical learning environments into intense social and sensory challenges but make large animals particularly engrossing.

More than 60 years after Grandin, a CSU professor and the subject of a recent series on HBO, was diagnosed with autism, 15-year-old Micah Wilger’s Asperger’s syndrome inspired his mother to help found the Temple Grandin School for Asperger’s students in 6th through 12th grades.

Jennifer Wilger, director of curriculum and instruction at the Temple Grandin School, began working on the plan in October at Bridge School after she found out the school would soon close. Many of its students, like her son, relied on specialized education and understanding instructors, she said.

“We’re hope to create something for those kids who are really bright, who have passion, but may also have challenges in the social arena, so that they have a hard time fitting in, a hard time thriving and are not likely to reach their potential,” Wilger said.

Temple Grandin didn’t learn to speak until almost age 4, earned a doctoral degree in animal science, revolutionized feedlots and slaughterhouses, wrote six books and is a renowned speaker and Autism activist. But her diagnosis was more than 60 years ago, and the public’s understanding of autism is still limited.

Asperger’s was first made an official diagnosis in 1994, and medical professionals still argue about whether or not it should be classified as an autism-spectrum disorder.

It often goes undiagnosed until age 6, if at all, Wilger said, because Asperger’s doesn’t present as young as classical autism, which can be diagnosed as young as 12 months. One of the criteria of Asperger’s, however, is the lack of a clinically significant language delay, which isn’t as noticeable in younger children, she said.
Wilger said she considers her family lucky because her son’s diagnosis came when he was 3. He was an only child with a tick and a tendency to reverse pronouns. The diagnosis was a blessing, something she could work with, she said. At 15, Micah Wilger sings in a choir and does well in school, with pretty typical trouble in math: “He inherited my math gene,” Jennifer Wilger said.

The Temple Grandin School, which may find its roots in Boulder but will most likely grow out of Lafayette, would ideally be open to students this fall, Wilger said. In its first year, the school will be primarily funded by tuition. As students and potential teachers come out of the woodwork, Wilger said she hopes to avoid the struggles public schools’ special education services present.

“The services for Asperger’s are not good,” Wilger said. “It’s that whole blinded-by-their-strengths (concept). They’re so bright. They’re so verbal. They have so many other things that society labels as intelligent or, in many cases, gifted. …With budgets being what they are, social skills programming is very low and it’s never been high.”

On Asperger’s: “We really are targeting Asperger’s because it’s a defined thing that we can create a set of programming to meet their needs. It just so happens that there are several other related kinds of things that would benefit from similar
program components.”

On service: “Special education has tended to be a deficit model, serving a lot of kids with learning disabilities who are not cognitively smart or at least have gaps between different subjects or areas of their intelligence, so they fall through the cracks a lot, especially without a diagnosis. But even with one, they’re not going to get a lot of services.”

Seeing the truth: “I didn’t realize it with my son because he wasour first. Until we had our second and I thought of things he was doing, I thought, ‘Oh wow, this is really, really different than how Micah was.’”

A new school: “The social skills for people with Asperger’s are very specific in nature. …The programming will be very individualized. The first thing I like to highlight for people is strength-based, whereas special education in schools is going to be deficit based.”