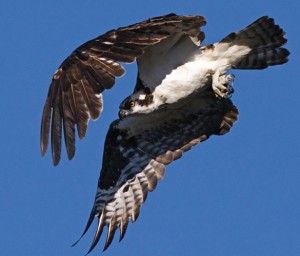 A small bird darts just overhead, hugging the side of the ridge, holding its wings back like an F-14. Binoculars and cameras point quickly in the little jet’s direction. “What is it?” someone asks.

A dozen wing beats later, another yells, “A kestrel! A female!”

After wintering in Mexico, this vibrant falcon is traveling north with urgency. The kestrel, like other raptor species, migrates south every fall, then beelines north in spring. This bird passes the Dinosaur Ridge Raptor Monitoring Station where volunteers count raptors from March to May.

These daily counts are entered into a national repository. Researchers from around the world use these numbers to track raptor populations and analyze trends.

Jeff Birek, biologist for the Rocky Mountain Bird Observatory, oversees the hawkcount program on Dinosaur Ridge. He says long ago raptors moved out of their home areas because of food scarcity pressures.

Ultimately, for the birds it’s about self-preservation. The Swainson’s Hawk leaves Colorado by October, flies 6,000 miles to La Pampas, Argentina, then returns in April.

Why Migrate along our Front Range?

Raptors migrate along a few major U.S. corridors. These birds, particularly soaring birds such as turkey vultures, hawks and eagles, use the terrain to their advantage. Rather than waste energy flapping like a dancer at a Panic show, the birds ride ridge lifts—wind forced up the face of a sloped contour like the Front Range. Another free ride is a thermal, which are pockets of warm, rising air. When that air cools, the bird jumps to another thermal and rides for hours with little more than a few flaps.

Perched on a rock spine several hundred feet above the din of Denver, you forget you’re human. Raptors pass at eye-level. Scanning the skyline for tiny silhouettes takes the mindfulness of a monk. Then…

Someone spots a red-tail hawk over Mount Morrison. Other volunteers join the optical chase. The big question: Is it a migrant or a local? Locals aren’t counted. It climbs higher before peeling off south.

A turkey vulture commands the air 50 feet above. But this road-kill epicure is one of the most adept soaring birds in the world. Today, it’s riding the ridge lift and moving north.

A site with everything birds: including a Colorado birding list with daily sightings. birdingonthe.net