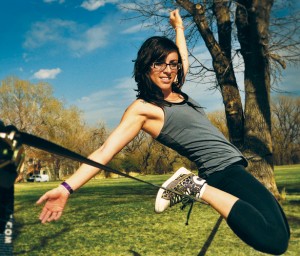 Although April’s Golden Classic II needed only an elephant to be a circus, it was just a day at the park for slacker Taylor Fultz.

She cheered on her friends, grown men, who used hula hoops to break ties while they balanced on slack strips of tubular nylon webbing strung between two trees. The men’s competition—a lesson in awe and comedic disaster—is a dream for Fultz, whose win in the women’s competition was a calculated display of well-practiced tricks.

“I didn’t start actually training for the (competition) until about two months ago, when I decided I wanted to start competing, but I’ve been learning tricks for about six months now,” she said.

But the skills are perishable, so she nailed her chest bounce—dropping from a standing position on the line to her chest and bouncing upright—but didn’t attempt a butt bounce. She’s done both tricks countless times, but she’s also taken some gnarly falls (on her neck) trying the butt bounce.

“All of the butt bounce combos are really hard,” she said. “There are some tricks, the really hard ones, that I get, but if I don’t do them every day, then I can’t do them. …Half the time, I don’t even land (the chest bounce) right, but I just push so hard to get up that I make myself land it.”

Bruises, grass-stains and rope burns don’t serve as much of a deterrent, so she hops on the line to walk it at the same time as friend and fellow competitor Cassandra Miertschin. Their goal? To get close enough to high-five.

Their male competitors do backflips and take uncontrolled falls into the watching crowd when the line and their plans don’t match up. Some slackers, like any extreme athletes, push the bounds of slacklining and highlining to develop new tricks and styles, earning fame and notoriety among the slacklining community. They’re her friends, and they continue to help her train, so she said she genuinely appreciates their work and talent, but for her own training, she opts on the side of calculated risk.

“I think there aren’t as many women slackliners and they haven’t been doing it as long and they’re not as experienced, because I don’t feel as comfortable doing a lot of those tricks,” Fultz said. “I like that there’s always a women’s competition, but I’d like it to be that one day the women can compete with the men, that it’s equal. I definitely didn’t feel like I could compete with the guys.”

Although competing in a co-ed competition is not in the near future, she said she’s got great teachers. From her first day on the line, she slacklined with some of the top competitors.

“It’s a great community of encouraging each other and helping each other out,” she said. “They kind of brought me in and…immediately started teaching me tricks and how to walk.”

In the hours before competing in the Golden Classic II, Fultz coached her competitors, including second place winner Carissa Pilling, who said they encourage each other, even when they’re competing.

“If I see Taylor do a trick that I like, I’ll ask her to teach me how to do it and she’ll give me tips,” Pilling said. “Competing against Taylor in the finals at the Golden Classic felt just like another slackline session at The Spot (Bouldering Gym), except with people watching us.”

When the winners were announced, Fultz and Pilling hugged.

Fultz said she helps beginners focus on the end of the line, keep their hands up and bend their knees, absorbing the line’s movement there instead of with their bodies.

“If it starts to shake or wobble, if you can catch that in your knees and sink down into your knees, then your body is still stable,” she said. “The best advice I ever got was not to try to walk, to get every step perfect. So doing that, balancing on one leg until you get it right and then, when you get comfortable, take a step and stand there as long as you have to because walking might throw you off.”

She said watching is the only way to understand. On a slackline, varying the tension and length of the line can change the difficulty of tricks and walking.

“It’s really nothing like tightrope walking, but that’s the closest thing anyone can ever get to it,” she said.

She doesn’t know when she’ll compete again but wants to compete in the international Gibbon ISPO slackline competition in Germany, where she’ll have to be known to get in.

She’s well on her way there, 2010 ISPO champ Michael Payton competed alongside her in the male competition in Golden. She said gaining notoriety among the community and getting sponsors could help her get into the ISPO competition, but she doesn’t foresee a problem. She’ll be on the line no matter what.

“I think it’s easy because I’ve progressed this far in one year,” she said. “One year ago, I didn’t even know what slacklining was.”

No known deaths have been caused by slacklining, but it’s not hard to jack up an ankle or wrist falling (and everyone who slacks falls), so here are a few tips:

1. Actually lace those fancy high-tops. They’re not just cute, they can protect against rolled ankles and rope burns.

2. Do yoga and learn to roll while falling. Flexibility and learning how to fall are essential for tricks that send slackers reeling uncontrollably.

3. Slackers and climbers are communal, and it’s OK to throw a couple back, but inverted tricks with a .12 BAC? Not so much. Be cognizant of the dangers.

4. Expect to get slapped, burned, bruised and laughed at. And learn to love it.