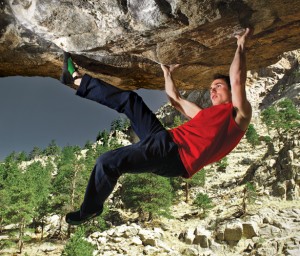 The Game isn’t a problem for gumbys; it’s an inverted rockface in Boulder Canyon and one of the hardest bouldering problems in the world.

But 22-year-old Carlo Traversi, the head route-setter at The Spot Bouldering Gym, isn’t a gumby, which is what climbers call rookies. He’s been climbing for roughly nine years. It took him five days to beat The Game.

The day he topped it out, a crowd of more than a dozen people hovered on the craggy rocks under him, watching.

“I just kind of went into fight mode,” he said. “I was screaming…because I knew it was happening. I was like, ‘This needs to happen right now. If I can just take control of this, it’s going to happen. I’m making this happen.’”

He was the second man to send (“top out” or reach the top of the route) The Game, an unassuming boulder that proclimber Daniel Woods sent for the first time in February of 2010. It has tiny crevices for handholds, which climbers hang from and dig toes into to lurch for the next holds.

“(Woods) graded it V16, which is kind of unprecedented, and no one really thought it was going to get repeated for a really long time,” Traversi said.

It’s one of few such problems recognized by boulderers world-wide. A little more than a year after Woods sent The Game, an “unmotivated” Traversi, still stinging from a bad bout in the area’s bouldering nationals, decided to climb outside. The Game was close, hard and “something cool to work on.”

“Oddly enough, five days later, I just topped out, which was really strange.”

Close friend and fellow climber Connor Griffith said he knew Traversi would eventually top that route, but not that day.

“The conditions were not that good; it was kind of humid out,” Griffith said. “He actually took kind of a bad fall and hurt his ankle before the send, and then a bunch of strong climbers showed up, and I think that got him psyched. Then he sent it.”

Griffith has climbed with Traversi for more than six years, but he said watching Traversi send The Game stands out as special.

“He’s always inspired me,” Griffith said. “I’ve seen him send a lot of stuff, but that was by far the most inspirational.”

But Traversi is not easily satisfied. It was his first V16, but he calls it his first V15. He said he doesn’t get nervous, but climbers compete with themselves; he’s his toughest critic. He said he’s had few great competitions in his life. Sometimes winning a competition doesn’t include finishing the toughest routes, and without a top out, Traversi said he knows he could have climbed better.

He won this year’s rope climbing nationals at a climbing gym in Boulder, but he doesn’t train with a rope. Instead, he trains on a treadwall (picture a wide, vertical treadmill with climbing holds) and boulders indoor and outdoor for variety.

It’s about building the skills to push farther, he said.

“You don’t build those muscles anywhere else in your life other than climbing,” he said. “It’s really how much time and dedication you’re willing to put into it.”

“Even at 40 or 45 feet, having bouldering strength is going to get you to the top of the wall, regardless, so I focus on that,” he said. “You obviously kind of analyze what kind of location you’re going to be at, see what it’s going to take out of you, and then alter your training program based on that.”

For bouldering, outside of simply practicing on the walls, heavy weight-based exercises with few repetitions keep his body prepared.

“You just want short little bursts of power,” he said.

His advice: Climb on a variety of problems, learn how to control breathing and maintain focus (even while screaming), and come up with an adaptable strategy.

And climb constantly: He’s climbed worldwide since he started at age 14, everywhere from Canada to Beijing to Switzerland to an upcoming stint in Colombia.

He’s learning his athletic performance peaks and valleys, a strategy he said he’ll focus on for the open world championships in Arco, Italy, in July.

“That’s going to be a big one,” he said. “The whole town comes out. It’s like a big festival, so you’re kind of put on a pretty big stage. It’s going to be completely unfamiliar terrain…but there it’ll be different holds, different walls, different everything.”

He said this might be the one that finally makes him nervous.

Climbers are especially susceptible to pulled muscles in their backs or shoulders and knee or ankle problems from landing and twisting, but Carlo Traversi, head route-setter at The Spot Bouldering Gym, said he tends to hurt the pulleys in his hands.

He’s been lucky this year.

“I’ve only had one minor finger injury,” he said.

But that’s not for lack of trying, or lack of care. As prevention and treatment, Traversi uses contrast baths, alternating cold and hot water to manage blood flow in his hands before and after workouts. A pulley (think tendons and what makes your fingers bend and stay bent) injury can take him out for a week or more, so he takes good care of his hands.

Typically, he uses a couple of ice cubes in cool water to hit the temperature that makes his fingers tingle, but ice baths can reduce swelling, and hot water can bring blood into stiff fingers. Cool water, instead of ice baths, actually increases blood flow to the hands by encouraging the body to increase blood flow to the hand in response to the cooler temperature. So it takes a minute, Traversi said, to feel the tingle after the initial blood vessel restriction.