Home on the Range

Finding Quiet and True Colorado Spirit in the Pawnee GrasslandsChris Hawkins
Published on: May 20th, 2011 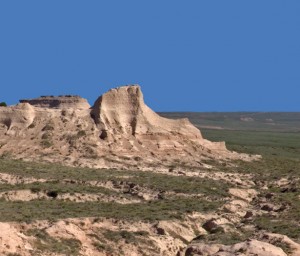 Keota is being swallowed up slowly by the prairie. The tiny ghost town on the Pawnee Grasslands was once a community of 140 Coloradans, a railroad stop on the “Prairie Dog Express,” and inspiration for a great American novelist. But in this unforgiving land, Keota could only hold on for so long. Out here, nature does things its own way.

The Pawnee National Grasslands sit on 193,000 acres of private and U.S. Forest Service land in northeastern Colorado. The land—dominated by blue grama and buffalo grass, prickly pear cactus, sagebrush and little water—unfurls like a lumpy earthen carpet for miles in any direction. Buffalo in the thousands once passed through, sustaining their hunters, the Pawnee Indians. Fur trappers arrived, then ranchers, and then farmers.

But today, the only signs of civilization are rusted barbed-wire fences, creaking windmills and a few cattle ranches. Most of the life here is not human or domesticated, it’s wild. Antelopes bound across grassland, often stopping to watch you watch them. Coyotes slink through arroyos. Swainson’s hawks—one among the 200 species of birds—perch on what seems like every fence post. Here, the big sky pacifies one minute, riles and threatens the next. You can watch the evening light fade in the west while still radiating in the east. You seldom run into people. And except for the songbirds and the wind, it’s eerily quiet. It’s beguiling.

Sometimes the wind tickles, sometimes it punches relentlessly. But it’s always there. During the Dust Bowl of the 1930s, winds of 50 to 60 mph regularly blasted the Grasslands. Combined with years of drought, the wind ruined farmers such as those in Keota. One of the few residents who remained in town after this devastation was Clyde Stanley.

Stanley was born in 1887 in Missouri, but his family soon moved to Colorado. After attending schools in Boulder and Lafayette, Stanley bought a printing press in Erie and started the Erie News. Then he moved his printing operation to Keota where he published the Keota News and ran the Wayside Press. While in Keota, Stanley often hosted James Michener while the author was working on his epic Colorado novel, Centennial. Michener dedicates part of the book to Stanley “who introduced (him) to the prairie.”

Just beyond what’s left of Keota are the 250-foot-tall Pawnee Buttes, rising above the prairie like two Western sages. After the Cretaceous Sea dried up 65 million years ago, wind and water carved this sandstone pair, sparing little else in the area. Around the buttes, paleontologists and amateurs have dug up the fossil remains of a giant rhino and more than 100 other species, producing one of the finest vertebrate collections in the world.

From the Pawnee Buttes trailhead, the hike to the western butte is three miles round-trip. While the eastern butte is on private property, the owners are neighborly as long as you stay on the trail. If you visit the grasslands, be ready to get lost driving the maze of dirt roads.

And most of all, be ready for the desolation and silence.

Resources: Pick up Birding on the Pawnee by Automobile or Mountain Bike brochure at the Greeley USDA office (970.346.5000).

Around the Grasslands: Drive further east on CO-14 to Sterling and don’t forget to check out the town’s Overland Trail Museum.