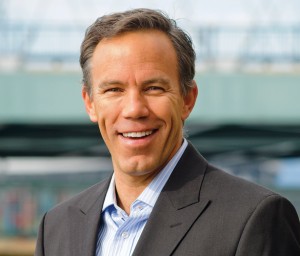 Though he retired from competitive skiing decades ago, Jeff Olson still has Olympic dreams. This time though, the two-time Olympian is not working toward personal glory atop a podium—but rather using a possible Olympic bid as a mechanism for raising awareness of and curtailing the child obesity epidemic. Olson, who co-founded the Metro Denver Health and Wellness Commission and has served on Denver Sports’ bid and legacy committees, theorized during the recent TED X that if you give fitness a super-star makeover, kids will dig it. Here, he talks with us about healthy kids and Olympic dreams.

Inspiration: “I was at a medical conference six years ago, and we were discussing ways to get children active. It struck me that we were boring old adults and that we were talking about something that’s dictated in pop culture. For us to make an impact, health needs to be cool, hip and ‘the way we roll.’ We do this through entertainment, through technology and pop culture. And the end game is healthy, active lifestyles become just cool and hip.”

“This could be our Sputnik moment: to galvanize and energize a community about the Olympics and elevating sports for (our) youth.”

“Denver has authentic culture. Colorado is the least obese state in country. But it’s still going upward. What if we could frame the whole reason for an Olympic bid in advocating a healthy lifestyle?”

Olson wants to be clear: “Colorado is not bidding for the Olympic games. I’m part of a group doing what we can to make this a reality.”