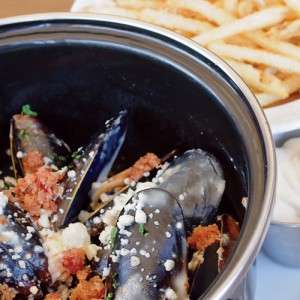 My husband’s coworkers wanted to take him out for a “manly” baby shower/happy hour and asked him to pick the venue. I thought it rather telling that, just a few weeks after we’d gone to check out The Cheeky Monk, he chose it as the place to fête his impending fatherhood.

When I asked him why he’d picked it, he said, “I wanted someplace with lots of good beer that also had good food.”

The Cheeky Monk Belgian Beer Café is exactly what it says on the tin: homage to Belgian beers with a café on the side. The focus is on the suds, with more than 150 beers to choose from at the Westminster location, ranging from varieties of true Belgian beers to local selections from—where else?—New Belgium.

This is not your typical beer experience, either. Beers arrive in glassware chosen specifically to enhance the tasting experience, the waiters are all extremely knowledgeable and have their own recommendations and favorites, and there are several beer flights, or samplers, available to show off the range of selections to the uninitiated.

An entire section of the menu is dedicated to moules-frites: freshly steamed mussels served with fries and a choice of aioli in sauces such as beer mustard and bacon Gorgonzola. After a decadent starter of cheese croquettes (elevated fried cheese), my husband dug into a bowl of the bacon Gorgonzola mussels. It’s a testament to the quality of the dish: he left his near-perfect shoestring fries practically untouched. Luckily, I was there to assist.

In the menu, I gravitated toward the entrees, determined to try something more Belgian-ish than grilled cheese. I was torn with choices of waterzooi, a Belgian seafood stew, and rabbit cassoulet. I landed on the Belgian bangers and mash. An excellent smoked chicken-apple sausage arrived on a plate swimming with an addictive brown mustard sauce, a heap of garlic mashed potatoes and a pile of utterly delicious braised sauerkraut. It reminded me of picnic food at a really excellent Oktoberfest—deeply satisfying.

For dessert, we went with the trio of beignets, stuffed with Nutella, cream cheese icing and cinnamon icing. Really, it’s hard to go too wrong with fried dough and Nutella, and these came as advertised. Nothing revolutionary but hard to pass up, nonetheless.

With three locations in Westminster (at the Orchard), Denver and Winter Park, the North Metro’s Cheeky Monk does end up feeling a bit like a chain, with an atmosphere reminiscent of big brewery-restaurant empires. But the focus on the beers and the staff’s encyclopedic knowledge set the place apart as an original.