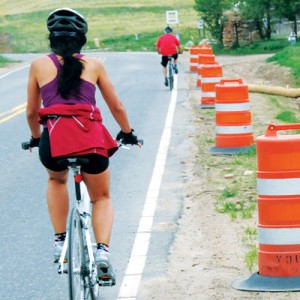 Getting around on two wheels in Boulder County keeps getting progressively easier, safer and more convenient as more roads get the “bike friendly” treatment. June being Bike Month in Colorado—and Bike To Work Day being the fourth Wednesday in the month—it’s worth noting the serious improvements to county roads that are used by fitness and commuter cyclists alike (like yours truly).

Probably one of the most hellish stretches for a cyclist in Boulder County is Valmont Road between 75th and 95th streets. It’s motley clumps of asphalt patches, complete lack of shoulders and not one but two sharp S-curves make navigating that stretch an exercise in survival. Contrast that with Valmont Road to the west of 75th Street, and the difference is stark.

Tim Swope, the county’s capital projects coordinator, said the stretch of Valmont will get the Full Shoulder Treatment—11-foot driving lanes and 5-foot shoulders—the whole way through. After some drainage issues are solved and culverts are replaced, reconstruction will begin in August and last through November. Other projects either nearing completion or set to begin this summer, Swope said, include:

Lee Hill Road from 4th Street in Boulder (just west of Broadway) to Olde Stage Road. That stretch is getting drainage issues solved, a wider roadway and 5-foot climbing lanes. That section of the popular cycling loop that includes the lung-busting climb up Olde Stage Road and 50 mph descent to Buckingham Park and out Lefthand Canyon Drive to U.S. 36 has been in need of shoulders since I commuted on that stretch daily beginning in 1987.

Boulder County has just begun adding 5-foot shoulders to Cherryvale Road between Arapahoe and Baseline roads; a project that should be done by the end of summer.

Engineering work and preparations will be finished this year in preparation for rebuilding Neva and Niwot roads from U.S. 36 east to 63rd Street. This includes side shoulders, too.
Other ongoing projects include working with the Colorado Department of Transportation on getting similar shoulders installed on Colorado 93 south out of Boulder. That stretch of highway is one of the few routes south to Golden, and while not a favorite with cyclists because of the precarious lack of shoulders, highway speeds and big trucks that use it, many riders still flirt with death and give it a ride.

But probably the most glaring place in need of shoulders is East County Line Road that forms the border with Weld and Boulder counties. The road offers a straight shot from Broomfield to Larimer County. Apart from a few sections widened for developments in Erie, the road is mostly a shoulder-less speedway. Boulder County hopes to get started on improving the Longmont to Erie section in the next year or two, according to Swope.

It’s worth pointing out here that all of these improvements are key to making the increasingly traveled road of Boulder County safer, both for motorists and bicyclists. And while progress may seem slow, it would be downright glacial without the .1 percent tax (a penny on a $10 purchase) that was passed by voters in 2001 and extended in 2007 to sunset in 2024. It generates about $3.5 million a year, about 15 percent of which goes toward regional trails and the rest is spent on road and transit improvements.

The success of Boulder County’s transportation tax is a great example of government being good stewards and improving our lives by using taxes. Next year, RTD will ask for a .4 percent tax (four pennies on a $10 purchase) to put some zoom in FasTracks and get that worthy project done faster. It’s money well spent and we should do much more because government can and does do good with our taxes.