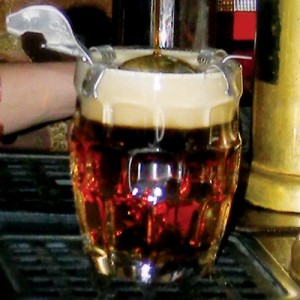 A recent visit to my brother in Berlin left me with a different take on that country and the almost reverent idolatry of their beer heritage. After all, it is the German Beer Purity Act of 1516 (called the Reinheitsgebot) that is pointed to by purists as the reason for the Reinland’s historically superior suds. The law (since repealed) limits what can be used in making beer to water, barley and hops.

This made for excellent beer that wasn’t polluted with cheap adjuncts like corn (sugar) or rice (used prodigiously by Budweiser USA, among others). But what I found odd was the somewhat common practice of using beer as a cocktail mixer and even adding other sodas to a brew. My sister-in-law likes a diesel, a mix of pilsner (or any beer) and cola. A Radler—German for “cyclist” (or a Shandy, as they say in England) is a beer mixed with either Sprite, cider or lemonade (hard or not). A Russ’n is a wheat beer with lemonade; it’s damn good and can be slammed en masse on a hot day without fear of becoming staggeringly hammered. Truth. Another strange concoction I tried was a Susi Sonnenschein, a wheat beer mixed with Havana Club rum and banana juice. It’s actually not bad, with the effervescent citrus notes of the wheat beer and the banana juice helping to push that flavor up front, but they can ambush your sobriety.

I have nothing against using beer as a mixer. There is room for experimentation. But seeing the zeal for it in Germany—the land of beer purity—was funny. You’d think there would be some law about fouling a perfectly good brew with Coke, but you’d be wrong. Don’t be surprised to see these zymurgic concoctions hit menus as the trend takes off.

Chef Bradford Heap has jumped aboard the beer pairing dinner bandwagon with a monthly offering at his acclaimed Niwot restaurant. The first Wednesday of each month, Heap will prepare four courses and pair them with specific beers from local breweries. He started off with Great Divide and is hooking up with Avery for the July 6 dinner. Cost: $45 per person.

Upslope Brewery has a fourth beer out in cans: the Upslope Craft Lager. It’s somewhat light (4.8 percent alcohol by volume) and rather crisp and bright with a mild hop bite, as compared with other craft pilsners available in Boulder County. In addition to expanding and renovating the tiny tap room, Upslope has also expanded its hours to 2–8pm Tuesday through Thursday and 2–9pm on Friday and Saturday; closed Sunday. Gotta check out the new roomy digs.

Saison is French for Summer

Twisted Pine’s popular Le Petit Saison is back on tap for summer at the taproom on Walnut Street just east of 30th Street or in 22 ounce bottles at your favorite liquor store. This citrusy and lightly fruity beer owes its flavor profile to the yeast, and brewer Jeff Brumley says he keeps the malt and hops somewhat subdued in order to let the yeasty flavors remain front and center. At 5.5 percent AVB, this is a nice summer session beer, but only after you’ve put the weed whacker away for the day.