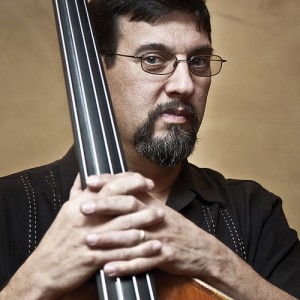 A practical fixture in the Colorado jazz scene, Mark Diamond’s bass has backed up nearly every serious player in the state at one time or another—to the point that he now fronts several of his own acts, including the Heavy Cats, which hosts blues and jazz jams every Sunday of the month at the Boulder Outlook Hotel. Here, Mark talks about 30 years of Colorado jazz, musical telepathy and why he loves living in Colorado.

French Davis: Mark, can you talk about your background and history in local jazz and blues? You’ve become a bit of a fixture in the last few…well, decades, now, isn’t it?

Mark Diamond: Ha, yes, decades! Thirty-one years and counting. I moved here from New Jersey in 1980 with the band Arabesque, a five-piece acoustic string band that looked like a bluegrass band, which we were, but we also played jazz and swing, country, funk, a little reggae and almost anything else.  Then I joined a traveling band called “The Seattle Rhythm Band,” which played Latin jazz/rock, salsa, funk and contemporary tunes of the time.  After a year on the road, I came back to Boulder and joined a blues band from Fort Collins which became The Blues Survivors. During this time I met pianist Andy Weyl and alto sax player Michael Sweeney, and we started a jazz happy hour on “The Mezz” in the Hotel Boulderado. This turned into a five-days-a-week jazz happy-hour gig that lasted through most of the ’80s.  We called it “The Jazz Showcase” because each day we “showcased” a different special guest artist, which might have been a horn player, guitarist, drummer or singer.  This gig was a big part of my jazz education because I got to play with more experienced, world-class musicians every single day. Twenty-nine years later Andy and I, along with drummer Paul Romaine are known as “Big Swing Trio,” and are the house band for The Sunday Night Jazz Jam at the Boulder Outlook Hotel, among other gigs.

FD: You’re working with some of the best-known and most talented players in the state. How does your communication evolve, musically, playing with the same people week-in, week-out?

MD: The longer you play with somebody, the higher the level of telepathy that occurs. When I work with musicians that I’ve played with for many years, there is an inherent trust that allows us to go where we want to go musically.  When you know the language of jazz, or any other style of music, you can play with anybody, anywhere, and create a great performance.  It doesn’t matter who you add to the mix, as long as they know what they’re doing. I’ve been in foreign countries where I couldn’t even speak to the band and yet we were able to play great music together!

FD: Why Colorado? Why not New York or Chicago or LA? What has kept you here?

MD: I came to Colorado from New Jersey, very near New York City, where I cut my teeth as a young musician.  As great as New York is, I always had affection for the mountains.  I first visited Colorado in the summer of 1977 while hitchhiking all over the country with a friend.  This is where I met my great wife Karen, raised two wonderful children, and made so many friends. It’s home!

FD: Who have been your biggest influences in music and why?

MD: This is always a hard question to answer because it takes the history of music to answer it.  I love and play so many kinds of music, and when I’ve delved into each style that I’ve studied, the innovators stand out.  If I have to choose a few, I’d say Traffic, Joni Mitchell, John Coltrane, The Beatles, Scott Lafaro, Ron Carter, CSNY, The Allman Brothers, Charles Mingus, Muddy Waters, James Brown, Willie Dixon, Tito Puente, you get the idea.  And as for why, I’ve had an emotional response to all of these artists, and I think if the music moves you, it’s serving its purpose.