The Bolder Life: The Dos and Don’ts of RockyGrass 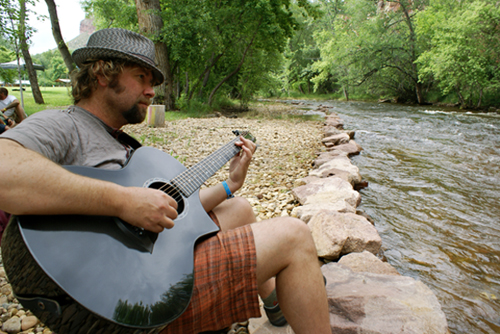 As a long-time resident of Lyons, I could write for days on all of the RockyGrass Festival “experiences” that I’ve seen and had myself. As a kid, (in a time long, long ago), I used to play hide-and-seek in the old silo and attended some of the best, most scarring, haunted houses in the other ancient buildings that dot the now Planet Bluegrass property. Every year, festival season sends a spark through the town of Lyons, transforming the small mountain community into one of the most sought-after places to be for three days in July.  By day, it’s filled with tourists, strolling in and out of the antique stores and artsy shops on Main Street, but by night, the town comes alive with the sounds of floating music notes, dripping in twang and bouncing around the sandstone cliffs that call Lyons home. Sporadic dancing, lots of picking and more straw hats take over Lyons for one musically inclined weekend of the summer. As a previous survivor of festival season, I’d like to share some Do’s and Don’ts with you to help you survive this year’s RockyGrass Festival as well:

Don’t seek parking in random neighborhoods. The people who live in those neighborhoods will not like you if you do. They might even call the one tow truck that works in town and have your car removed. Pay close attention to parking signs throughout town—they’ll save you some trouble in the long run. You can easily and affordably find parking at Bohn Park, which has buses right up to the Planet.

Don’t miss the “contests.” Every year, RockyGrass brings in the cream of the crop of well-known bluegrass artists (Alison Krauss and Ricky Skaggs have performed on the main stage at Planet Bluegrass). Obviously, everyone wants to check out the headliners of each festival, but be sure to catch the rising artists that battle it out for recognition and the opportunity to move on up to the main stages of bluegrass.

Do be a smart festivarian and keep yourself well-feed and hydrated throughout the weekend. Stop by the Barking Dog Café for a honey vanilla latte, grab a breggo at the Stone Cup, and pick up all of the water/snack provisions that you need to survive a hot, festival weekend, at the St. Vrain Market.

Don’t walk by the Lyons Fork Restaurant without stopping in for a margarita and some of the best food in Lyons. The restaurant and Beer Union is located on the northwest end of Main Street and owners Wayne and Debbie Anderson will be waiting for you with a giant smile and a margarita that will melt the summer heat away.

Do get inspired and sign up for Planet Bluegrass’ Song School. Watching live shows creates the nostalgic need in people to revisit their childhood dreams of becoming a rock star. Tune up your own set of pipes and explore the creative world of songwriting at the only kind of “summer school” that students aren’t forced to attend.

Don’t be sad if you couldn’t get tickets to RockyGrass this year. Oskar Blues’ music lineup is jam packed with popular bluegrass bands—that along with a steady flow of beer, sporadic dancing and lots of picking and straw hats will make you feel like you didn’t miss a thing.

Do have a fabulous, fun-filled time, don’t get too crazy and do be safe this weekend. Jam on BoCo, jam on.

View all posts by Tyra Sutak →