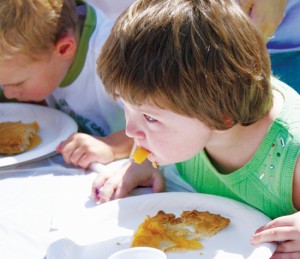 There are a few things Colorado does well; microbrews, jamgrass and pot consumption chief among them. But if you’re into agriculture—or eating—you know Olathe sweet corn and Palisades peaches are the two finest examples of their respective foods. The Lafayette Peach Festival focuses on the latter. More than 30,000 pounds of Western Slope peaches are trucked in for the event, which blends them into a creamy froth of live music, a gazillion takes on cobblers and pies and other foods and vendors, including plenty of artisans and antique dealers. Aug. 20, 9am, City of Lafayette, Public Road in Old Town, Lafayette, 303.549.1907

Considering the ridiculousness of the anti-gay camp, there’s no reason to miss a chance to stand up for the rights of this unfairly marginalized chunk of America. The Out Boulder Pridefest makes it easy for everyone to fly their rainbow flags, with a fun, three-day bash of music and events geared at promoting civil rights for our gay friends and family. Best part: headliner Frenchie Davis! Go see her and tell her how flattering it is that she stole the YS entertainment editor’s moniker! Aug. 28, 11am, Boulder County Farmer’s Market, 1750 13th St., Boulder

What do Paul Newman, Angela Lansbury, Dick Van Dyke and the Arvada Harvest Festival have in common? They were born in 1925. That’s right, one of Colorado’s oldest traditions turns 86 this year and is easily as youthful as it was in its 20s. Launching with a parade of the best marching bands in the state, the Harvest Fest morphs into a carnival atmosphere, punctuated by vendors, live music and vegetable judging contests. There isn’t a better way to cap a summer. Sept. 9–11, Arvada Historical Society, 7307 Grandview Ave., arvadaharvestfestivalparade.com

Early Bird Gets the Worm

Most bands’ press packs tout how they “defy pigeonholing or classification.” Once in a while, a band actually does that: Denver-based Paper Bird is that band. Some might call them a grass band, but Paper Bird is more; they’re an acoustic roots septet steeped in Americana, sprinkled with equal parts blues, grass and traditional jazz, and served with a side of pop-savvy hook writing. Basically, they’re really good. Sept. 8, Boulder Theater, 2032 14th St., Boulder, 303.786.7030

Sure we’re all psyched to have a day off of work, but here are five things you probably didn’t know about Labor Day.

1) Fruits of our Labor
Labor Day became a national holiday in 1894 under Pres. Grover Cleveland.

2) Labor Pains
To participate in Labor Day events and parades, workers had to forfeit a day’s wages
until it was made
a national holiday.

3) Local Labor
Colorado was one of the first five states to recognize the holiday.

4) Labor of Many
The other four states were Oregon, Massachusetts, New Jersey and New York.

5) Labor of Love
The U.S. isn’t the only country to celebrate Labor Day.