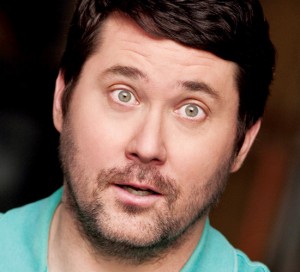 Doug Benson became a cult comic hero on Comedy Central’s Best Week Ever, then launched into American consciousness on the fifth season of Last Comic Standing along with his appearance in the pot-doc Super High Me. He now hosts two hilarious podcasts, Doug Loves Movies and The Benson Interruption. Here, Benson talks about writing jokes, being in love with Zach Galifianakis and hanging out at an amusement park in a bear costume…

French Davis: You were the sixth greatest comic in the world as of Last Comic Standing, Season 5. What was the experience like? Did you learn anything? Regret anything?

Doug Benson: I had a great time on Last Comic, made some life-long friends, a little money and my stand-up got a bigger platform than ever before. No regrets, and didn’t learn anything, either.

FD: You’ve been in comedy long enough to watch it evolve over the years.  How are things different today than they were 25 years ago? How are they the same?

DB: I think there is much more storytelling in stand-up now. Less emphasis on the joke. Jokes are still important, but it feels like a more intimate and personal experience these days.

FD: Which comedians have been your biggest influence, and why?

DB: When I was a kid, without knowing that I’d be a stand-up myself one day, I listened to albums by Steve Martin, Bill Cosby and George Carlin, over and over again. I had their stuff memorized. My parents weren’t thrilled that I could rattle off Carlin’s Seven Words You Can’t Say On Television routine.

FD: Who are some of your favorite comedians working today and why?

DB: There are too many to list, and I have too many friends in comedy who would be disappointed that I didn’t mention them. But I will say that I love Zach Galifianakis. But who doesn’t?

FD: You’ve got 150 words to pitch your own sitcom project. Go!

DB: It takes place in an amusement park, and I play a dude who walks around in a bear costume. How many words do I have left?

FD: What’s your writing process like? When do you know a joke is “done?”

DB: I just jot jokes down as I think of them, and then add them to the act the next time I’m on stage. Jokes are never really “done,” because each time you perform them you can add words or nuances that weren’t there before.

FD: Can you tell me about your podcast “Doug Loves Movies?”

DB: It’s a podcast where I sit and talk to my comedy friends, like Zach Galifianakis for example, about movies. Each week there’s a free episode in the iTunes comedy section, and there are also “premium” episodes in the Comedy Album section of iTunes for $2.

FD: You interrupted a lot of comedians on your Comedy Central show The Benson Interruption.  Who would you love the chance to interrupt?