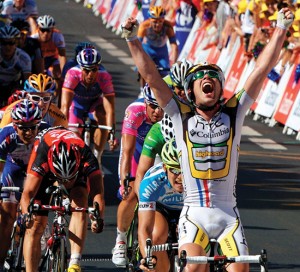 Since Colorado’s professional stage race was announced, the road to its 2011 start has been bumpy with management turnover, re-routing and the exclusion of two development teams on a technicality. Fortunately, the end is nigh. Come Aug. 22, the best teams and many of the world’s best riders will battle at the inaugural USA Pro Cycling Challenge on some of the highest roads on the calendar.

With the race just weeks away, I spoke to four area pros about training, their roles in the race and the altitude.

“In my experience doing high altitude races, between the 9,000- and 10,000-foot mark is really when you can see guys start to implode,” he said.

With this race, an entire stage barely dips below 8,000 feet. He’s been spending weekends in Leadville alternating with mountain bike rides to increase his power, which he says is easily lost at altitude.

Having grown up near Aspen, Hagman is familiar with the mammoth Stage 2 from Gunnison to Aspen that traverses two passes higher than 12,000 feet.

“I’ve been dreaming of winning this for a long time,” he said. “I know that road super well.”

UnitedHealthcare’s Aussie team leader Rory Sutherland knows dragging his 170 pounds across the Rockies puts him at a disadvantage against his wispier opponents. But he has two assets: being Boulder-based allows him to train on these roads, and only one stage finishes on a mountaintop.

“A lot of (mountain passes) are a long way from the finish line and it changes the dynamic of the racing. It’s not like an all-out blast of climbers to the finish line all the time,” he said. When I called him, he was in Salida preparing for the next day’s ride up Monarch Pass and to Crested Butte. “(The altitude) is a big unknown, for me and for pretty much all the teams that are doing it.”

Boulderite Timmy Duggan, who rides for Italian Liquigas-Cannondale, said UPCC is his biggest goal for the second half of the season. He’s put in a lot of training time at high altitude. He knows how quickly the thin air can shut down the body.

“The big difference is you only have one bullet to fire at altitude,” he said. “Once you go over that redline once, there’s no coming back.”

After riding most of the 130-mile Gunnison to Aspen route in training, Duggan, a climber, noted how hard he thinks the climb up Independence Pass will be. Just getting to the base of the climb requires miles of false flats and potential headwinds.

“I think it’s gonna be quite the show over the pass. … Some guys will be hurting for sure.” He somewhat-jokingly predicted half the peloton will be “swerving all over the road, wanting to get off and rest.”

Fabio Calabria of Team Type I – SANOFI will look after likely Russian leader Vladimir Efimkin, a Tour de France stage winner. The 23-year-old Golden resident will ensure Efimkin “expends as little energy as possible,” which means fetching water bottles, blocking the wind and chasing breaks. The Aussie has one other job: tending to his Type I diabetes with a continuous glucose monitor. He says it’s just a variable in his life.