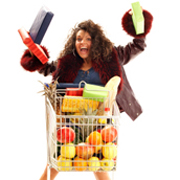 Confrontations. Arrests. Thievery. Sounds like a compelling plot for an upcoming blockbuster or crime novel, right? Wrong. These themes can instead be found in local and national news stories, surrounding one of the most harmless activities out there: couponing.

Thanks in part to the popularity of TLC’s Extreme Couponing, some shoppers are getting more than they bargained for in pursuit of savings. Coupon Sherpa reflects on the most extreme couponing mishaps to date.

1. “I Didn’t Know it Was a Crime.”
That’s what she said. Seriously. Earlier this month, compulsive-coupon-clipper Jamie VanSickler was charged with larceny theft, a misdemeanor carrying a potential jail sentence and hefty fine. Caught in the act by a newspaper-carrier-turned-sting-agent, VanSickler took 185 leftover Sunday newspapers, indicating to police she didn’t realize it was a crime.

2. “No (Coupon) for You!”
When a mother of ten tried to redeem coupons at her local Kroger store in Georgia, the store manager allegedly refused to take her clippings and called her a “habitual coupon user.” This southern momma is not only the only victim of “coupon discrimination,” as other shoppers around the country hit roadblocks at the register.

3. Just Another Day at Walmart
April Cuevas was temporarily banned from all Walmarts after an altercation involving competitor coupons. When the cashier refused to take the coupons, management was called and a series of unfortunate events ensued. Cuevas misinterpreted the intentions of four male shoppers headed her way during the argument, and attempted to film them. A supervisor alledgedly scolded her and tried to knock the iPhone from her trembling hands. Upon exiting the store, Cuevas was pursued by a Walmart employee who demanded she return to “the scene of the crime,” and even chased her vehicle as Cuevas left the parking lot.

4. Coupon Capers
Lock your doors, close your drapes, and hold tight to your…er…newspapers; there’s a new kind of criminal in town. As arrests of self-proclaimed “discount-seeking thieves” escalate around the country, police warn concerned citizens of an increase in newspaper theft.

5. Discount Diva Dishonored
On the cusp of a new season of “Extreme Couponing,” coupon enthusiasts cried foul when one of the featured shoppers was recognized as Jaime Kirlew, aka “Diva for Coupons.” Kirlew made a name for herself on YouTube, unwittingly filming her unscrupulous strategy of barcode matching during a shopping trip to Target. After receiving numerous nastigrams, Kirlew quickly threw her enabler (BeCentsAble) under the bus and later admitted to coupon fraud.

CouponSherpa.com is one of four websites operating under the brand name TheFrugals.com and is dedicated to helping consumers save money and live more frugally. Other members of The Frugals family include GiftCardGranny.com, MrFreeStuff.com and MrsSweepstakes.com.

Check out our tips for avoiding couponing mishaps in Couponing Like Momma Couldn’t.

Plus, Pick a Poison, Drop a Dime, Save a Smidge with all of the ins and outs of modern couponing.