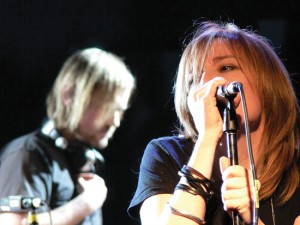 A Rare Breed
There’s almost a mystique surrounding Portishead. Practically inventing the entire trip-hop genre with its 1994 debut album Dummy, the UK-based trio pioneered the sound in an inimitable way. Lush, soaring soundscapes punctuated by heavy backbeats and jazzy melodies marked the press-averse group; their reticence to participate in the media machine further ratcheted up demand. In 17 years, the band has only released four albums. Nonetheless, Portishead has decided to travel, so you won’t want to miss this. Oct. 27, 1STBANK Center, 11450 Broomfield Ln., Broomfield, 303.410.8497

Big and Tall
They Might Be Giants has made a career out of being weird enough to appeal to almost everyone who’s ever stumbled across them. From their early days writing songs for their answering machine (“Dial-A-Song” had hundreds of tunes on their phone number) to scoring TV show themes, if there was one band representing the good-humored, slightly disenfranchised geek since the ’80s, it’s TMBG. And they put on one of the best live shows you’ll ever see. Nov. 3, Boulder Theater, 2032 14th St., Boulder, 303.786.7030

Musical Drinking
There are two things Colorado has in abundance. Actually, there are lots of things Colorado has in abundance (Subarus and golden retrievers). But I’m talking about bands and microbreweries. These days, every person knows someone who’s either in a band or makes beer. So, it makes sense they should go together. Thus is the mantra of the Boulder Brew and Music Fest, featuring dozens of beers and bands for your drinking and listening pleasure. Nov. 5, Fox Theater, 1135 13th St., Boulder, 303.447.0095

Be a Turkey
With November comes cold nights, eating and couch-potato-ing (We have that statement tattooed, tribal style, on our upper arms). Which means you’ve got to keep yourself in good shape, otherwise in spring, you’re gonna look like a cross between David Crosby and a water cooler. Take our advice: Pop over to the Longmont Turkey Trot, featuring a 10K run and a 2-mile fun run. That should help at least a little bit. Nov. 12, 9 am, Altona Middle School, 4600 Clover Basin Dr., Longmont, 303.651.8406

1) Charlie Sheen: Confuse everyone and dress up like Ricky “Wild Thing” Vaughn. Nothing’s more winning than that.

3) Snooki: Just paint yourself orange and dress up like Bobby Moynihan’s version of the Jersey Shore star. Can’t miss on this one, especially if you’re male.

4) Lady Gaga: Most of her looks are somewhat iconic; I’m partial to the meat dress.

5) Captain Thor-Lantern-Hornet: Make a costume with elements from all of the super hero movies this year… Bonus points if you cram in Rain Wilson’s Super.