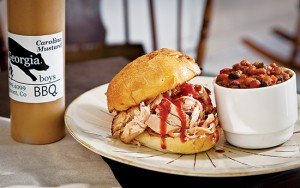 Not to sound crude, but these boys know meat. When I walked into this Longmont shack with a friend wearing a T-shirt from her aunt and uncle’s well-known barbecue place in Texas, the guy behind the counter called her on it. He wanted to know if she’d had as much trouble finding real barbecue in Longmont as he had.

Georgia Boys’ BBQ is about as real as it gets. Located in a “shack” (really a small house converted into a kitchen) in the industrial area off 2nd Avenue and Collyer, you belly up to the counter to order your meal, and then carry out or sit out front at a picnic table or in a rocking chair on the porch. (Plans are in the works for a small indoor seating area by winter).

The menu changes daily based on what they’ve got: Standards include pulled pork, pulled chicken, and sliced and chopped brisket as well as whatever specials they might be cooking up, which have included St. Louis-style ribs, Brunswick stew, stuffed peppers, jumbalaya, smoked half-chickens, po’ boys and even cheese steaks. One caveat: When it’s gone, it’s gone, and they’ve been known to run out of things by lunchtime if it gets busy. Check the Georgia Boys’ Facebook page, which they update regularly, so you won’t be disappointed if your favorite isn’t available.

In two visits, we tried the pork, the brisket and the chicken as well as a bevy of sides. My friend with barbecue sauce in her blood was impressed with the brisket—“The only meat that counts,” she said—which was tender, smoky and moist. The pork was also tasty, but I really enjoyed the juicy and flavorful pulled chicken, especially served up as a sandwich on a buttery, crusty roll. High marks for all of the meats we tried. We loved the variety of sauces; especially the medium with its blend of sweet and spice and the mustard-based sauces.

But, to my mind, the real winners here were the sides. The green bean casserole was by far my favorite—with big chunks of mushrooms in the creamy sauce and homemade fried onions, topped with melted cheese; no condensed soup or canned crispies here. The barbecue beans were a surprising hit as well with three kinds of beans cooked in a slightly sweet sauce with bacon and peppers, making a sweet and savory combo that was hard to resist. The sweet potato casserole with its gooey, decadent praline topping was clearly a house favorite, but I would have made it a dessert. The tater salad was fine and fresh, but not particularly mind-blowing, and the mac and cheese, while tasty, was a little grainy.

If they add fried okra to the menu, we’ll be patrons for life.

Another nice point is that this shack is attempting to be zero-waste. Although everything is served in disposable cartons with plastic cutlery, it’s all compostable or recyclable. As we sat outside, practically licking our plates and enjoying the cool afternoon. A man pulled up in a slick, black Bentley and placed an order, proof positive the Georgia Boys may serve food from a shack, but the quality is fit for kings.