Formation of a Foodie: Farm to Old West Table 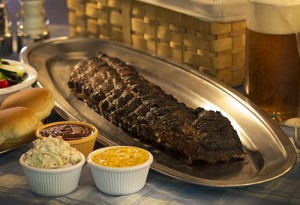 A rib rack with some not-so Old West sides.

The popular phrase “farm to table” basically means that the food you’re consuming is locally grown. The phrase has risen to prominence in the 2010s, and is a rejection of industrialized food. But just generations earlier, there were hungry pioneers who also sourced their food from the land. And so there’s little difference to the original “farm to table” and “Old West Cuisine.”

The Territory of Colorado was settled in 1861, and it became the 38th state in 1876. The pre-state days of the Old West brought miners from all over the country to the area, as hard-working men and women mined for gold, coal and more along the mountains. Food was what you found while you were there. Indigenous plants and animals supplied most everyone’s diets, and you often found items like buffalo and even squirrel on the menu. Food was simple and most everything was cooked over a fire. This was the diet of Old West cowboy cuisine. The days of hunting out your backdoor may be long gone and our palates may have matured — or softened — but the heart of Cowboy Cuisine is still alive in Boulder County.

“Barbecue has been around a really long time,” offered Merry Ann Webb, co-owner of The Rib House in Longmont. “Though, today, we’ve had to adjust how we do barbecue and we don’t use a pit anymore. You used to go and dig a hole, fill that with wood, go shoot a cow and eventually you’d have barbecue. Now, we use these great big digitized smokers that are safer and they’re a much cleaner way to smoke meat.”

Whether you’re eating your barbecue from a backyard smoker or you’ve decided to sit down to a white tablecloth, four-course plated dinner, the concepts and traditions started by the early settlers in Colorado have remained and, in some cases, may even have helped form those culinary styles so popular in Colorado today.

“I think the adaption of barbecue from the old Wild West to today is that it has just become more streamlined,” explained Webb. “Once you come up with your recipes and you build upon that, you’re able to do a lot more food with the technology and skills we now have today.” Farm to table may be the popular phrase, but, it’s always been about a return to the old ways, and here that means eating more like the pioneers and settlers.

The same can be said about eating fresh, local plants and animals. The concept may be used more by fancier, pricier restaurants, but it creeps into some of smaller establishments, too. Take for instance the Miners Tavern, a small community watering hole that has served residents of Erie since 1926. Miners Tavern didn’t always serve food, but about 10 years ago this popular watering hole added food to its menu, with a specific focus. “We straddle that fine line of being in a farming/ranching community, but the thing is, people in the area still love their beef, and in particular they love local beef,” explained owner Lee Carter. “For the last eight years we’ve used fresh beef that’s never frozen, and our patrons enjoy that locally sourced meat.” It has helped Miners Tavern grow a name for itself in the food community and still keeps the heart of the Wild West strong, using meat from Slim Pickens Quality Meats.