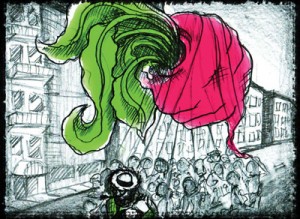 The future of Boulder County’s local-, organic-food-filled plates lies in the hands of non-elected officials this month as Boulder County’s Parks and Open Space moves forward with its first-ever comprehensive cropland policy. If Commissioner Will Toor approves the nine-part policy draft—a constitution for open space management—it would include provisions for local food production and distribution, water use and conservation, ecological approaches to agriculture, accommodating farmers’ needs and increased transparency.

“It’s really about, how do we make sure at each decision point we’re doing the best we can for all three of those,” Rounds said. “We are proposing to expand our organic farming programs, lowering the barriers to entering that market, supporting local food efforts and also popularizing and promoting the fact that most of the crops we do grow here, whether they’re grown on 500 acres or 10 acres, end up in the local food economy.”

The policy recognizes the ecological value in aquatic ecosystems on and around agricultural land and promotes conservation as well as farmers’ needs, Rounds said.

Rounds manages the Cropland Policy Advisory Group and its policy recommendation as it makes its way up the county government food chain to the commissioner who will make the final approval.

“The reason this policy exists is to encourage us to put down on paper exactly how we (Boulder County Parks and Open Space) do all of the things we’re doing,” Rounds said.

Right now, they’re debating and publishing broad statements about open space management standards for an official cropland policy. However, instead of asking about policy implementation—the document leaves out how BCPOS will fulfill these promises—the public focuses here:

Agricultural parts of the drafted policy cite generic reviews, tests and approvals by the Environmental Protection Agency, the U.S. Department of Agriculture and the Food and Drug Administration as they propose opening the door to additional GM organisms. Genetic modifications typically create pesticide resistance or increase yield but can nutritionally enhancement food or increase its pest resistance. Pest management provisions in the drafted policy reflect pro-GMO practices by allowing the use of pesticides that would harm
unmodified plants.

Cropland Policy Advisory Group member Rich Andrews said the majority of the group’s trusting approach fails to recognize extensive scientific research that led him and two other organic farmers on CPAG to disagree with the final recommendation and policy draft’s approval of GM crops and certain pesticides (glyphosate and neonicitinoid). He said he’d like to see the county ban those pesticides as well as genetically engineered crops, and set aside land to encourage non-GMO seed-supply production so area farmers “don’t have to feel captive to the giant seed companies.”

No legitimate scientific research—including that done by crop-engineering corporations, the FDA, the USDA or the EPA—indisputably proves pesticides or genetically engineered crops healthy or ecologically sound, he said. Although the policy requires those farmers using genetically engineered crops to prove any nutritional, production or pest/pesticide related claims before those plants are approved for use, it does not specify the proof or approval processes.

“BCPOS will develop a monitoring system in cooperation with farmers, CSU and other partner agencies to determine whether the GE technology is consistently delivering the anticipated and claimed benefits and whether any unanticipated adverse impacts have occurred,” the majority policy recommendation says.

“I’m glad they at least put in some criteria…” Andrews said. “…(Earlier in the process) it was basically just saying ‘If the federal government says it’s OK, it’s OK.’ I certainly can’t buy that because I know what the (federal) process is and I see how corrupt it is.”

True to promises of transparency, BCPOS’ preceding public policy meetings allowed for community comment, including a Cropland Policy open house Nov. 7, weeks after the draft and minority opinions were published. Now comes the sit, wait and trust groups including, but not limited to, Parks and Open Space staff, the University of Colorado, Colorado State University, CSU extension, CPAG, the Food and Agricultural Policy Council and the Parks and Open Space Advisory Committee.

A joint meeting of FAPC and POSAC will be held Nov. 15, an FAPC meeting on Nov. 16 and a POSAC meeting on Nov. 17. All are open to the public but not public comment. No date has been set for the policy’s submission to the commissioner or its implementation. To see the full policy draft, visit bouldercounty.org/find/library/environment/croppolicy.pdf.