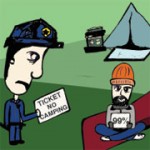 “One of the things we’re trying to do is coexist with these animals.”

“We’re very excited. It’s been a long process to figure out a replacement, but I think we’ve got a great program that we’ll be able to roll out that I think people are really going to love.”

—County Commissioner Will Toor on the EnergySmart loan program created to replace ClimateSmart Loan Program shot down by Fannie Mae and Freddie Mac.

“It’s been sitting in our storage room scaring everyone who sees an amputated arm.”

“We have some really good contacts with international coaches and we want to bring players from other countries to use the center as a high-altitude training facility.”

—Kendall Chitamber, the Rocky Mountain Tennis Center’s director of tennis, on what would be the state’s largest tennis club if it’s approved by the city. The Louisville club would feature more than 25 indoor and outdoor courts.

“I make no profit from this. It is a grant to a nonprofit, and benefits the town with no extra town expenditures of funds.”

—Superior Trustee Lisa Skumatz said of a grant to her firm to research the city’s new food-waste recovery program she helped launch.

Boulder dispensaries among the 26 state-licensed facilities