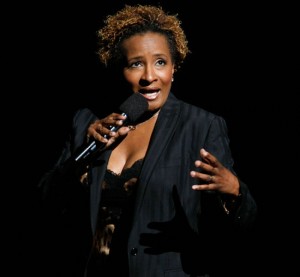 Wanda Sykes is funny. Anyone who says differently is someone you should avoid hanging out with, because they’re made of stone and laugh at things like prop comics and Dane Cook. We got the chance to catch up with her and talk about this year’s election, her love of Richard Pryor and what she thinks about Tim Tebow.
French Davis: Being a comedian can be like fishing an overstocked pond. Is the political landscape a treasure trove for you? Or is it a “can’t see a tree for the forest” kind of thing?

Wanda Sykes: I have a hard time with it. I have a few things I’m doing on politics and the Republican scene, but I just get angry and it’s hard to be funny—I can’t find the joke yet. They are a joke and it is really ridiculous. With all the rhetoric… it’s like they are going backward—with the hate and the racist undertones. Yeah, it really is just hard for me to not just be yelling and screaming and cursing and calling them names instead of being funny. When I find the funny I will talk about it. It’s just ridiculous right now.

FD: It’s been several years since you came out. Do you think the decision to come out had any impact on your career? How?

WS: I think it’s made me a better comic. I think I am funnier now that I’m out. It just removed another layer or another wall. It’s just all out there with nothing to hide, and it’s giving me more room to just say whatever the hell I want to say.

FD: You’re stuck on a desert island with one comedy album to listen to. Which is it, and why?

WS: Richard Pryor Live—I have listened to that probably 100 times and it still is the funniest thing out there.

FD: It’s the last 10 minutes of existence. What are you doing?

WS: Oh geez—oh boy, I better say the right thing and be with my wife and kids I guess. But if we could be together at a bar that would be awesome. You know, my wife and kids, and a nice bottle of something…maybe champagne.

FD: The surest way to piss you off is to…

WS: Be rude. People that are being rude, disrespectful… or telling me I’m wrong, that will do it.

FD: If you could pick one person to punch in the face right now, no consequences, who would it be, and why?

WS: Wow. Man, oh boy, that’s a hard one. There are so many people who need to be punched in the face. I don’t know if I could pick one. Right now, it’d be Newt Gingrich.

FD: If you were still a regular on Inside the NFL, what would you have said about Tim Tebow this season?

WS: What would I have said? Probably would have told him to focus on his own damn family. Maybe he should have focused on the playbook.

FD: What projects do you have in the hopper? What’s next on the horizon for you?

WS: I am going to be in Ice Age 4; we are still recording that. And I am about to start shooting in New Orleans next week, and, you know, doing stand up and hitting the road.

FD: What is your favorite breakfast cereal?

WS: When I’m being bad it’s Cap’n Crunch, and the other one is Raisin Nut Crunch.

—Deb Flomberg contributed to this story