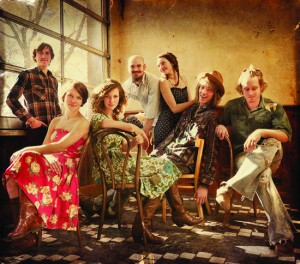 Colorado seems to be a haven for “eclecticism.” Which is to say, a lot of bands spew ad-nauseum about “how different” they are and how much they  “subvert the dominant paradigm.” The truth is your mom’s the only one who thinks you’re as unique as a snowflake. Paper Bird, however, is special. They’re harmonically far more interesting than just another “jamgrass” band. They tell stories lyrically and melodically. Their songwriting is enigmatic yet accessible. Paper Bird is that girl on the bus who you fell in love with, and she’s actually talking to you. So listen up. Fox Theatre, March 9, 8 pm, 303.443.3399.

The Boulder International Film Festival is not only one of the most popular film festivals in the state—it’s one of the favorites in the nation. With around 20,000 people flocking to the Flatirons every year, the event has grown into a true indie filmmaker paradise, and has been graced by icons like Oliver Stone, Alec Baldwin and James Franco in recent years. Last year’s even featured 54 films, even more are slated for this year. Feb. 15-19, various locations, Boulder, check out biff1.com for trailers and schedules.

Bear with us on this. When our publisher mentioned her son was in a band, there might have been some eye-rolling, and “she’s not gonna make us write about it, is she?” And she hasn’t. Then we checked his band, I’m On Fire. They’re actually good, and not one of them’s over 16. Which makes those of us who are older musicians kind of want to punch them. But they’re a tight, energetic band that dabbles in dub and funk with equal competency. Herman’s Hideaway, Feb. 22 at 7 pm, 1578 S. Broadway, Denver.

Ballet Nouveau Colorado’s presents “Love in the Digital Age.” It’s a multimedia bombasticism of dance and imagery brought by the same people who have produced similar shows for our local darlings Paper Bird, and big time national acts like the Black Eyed Peas. It’s a show focused on one of the most powerful forces on Earth: Love. And who doesn’t want to see a show about love? Unless you’re dead inside. At the Performing Arts Complex at PCS. $14+, Feb. 12, 1001 W 84th Ave., Denver, 303.466.5685.