Cheat Sheet: Where your news comes from 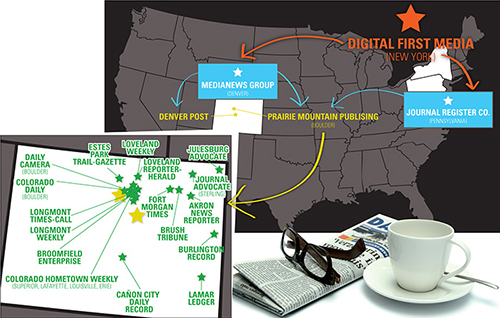 Boulder County is the sixth most populous county in Colorado and encompasses more than 751 square miles of land. Yet no matter where you live, it’s likely that you get your news from just one source: MediaNews Group, the Denver-based newspaper corporation that owns 54 daily newspapers and more than 90 non-daily newspapers in 11 states. When MediaNews bought the newspapers of Lehman Communications last January—including the Longmont Times-Call, the Longmont Weekly, the Loveland Reporter-Herald, the Loveland Weekly, the Hometown Weekly covering Lafayette, Louisville, and Superior and the Cañon City Daily Record—it was the local equivalent of the Rocky Mountain News going out of business in Denver. MediaNews owns every major newspaper in Boulder County and most of the minor ones.

After the sale, MediaNews began consolidating—including sharing content among the papers, to the degree where it’s not unusual to see the same story by the same reporter in everything from the Denver Post to the Colorado Daily. Employees have been laid off throughout the year, with 17 more let go last month as the company outsourced ad design and some production duties. Two more were let go on March 20, popular Denver Post columnists Mike Littwin and Penny Parker.

Prairie Mountain Publishing, the MediaNews/Journal Register Co. subsidiary, which oversees operations at 17 newspapers, including all of the MediaNews properties in Boulder County, has 380 employees. All of PMP’s holdings are illustrated in the graphic above.

Sandra Fish, a journalism instructor at CU-Boulder and a former Daily Camera reporter, said consolidation of jobs and duties can make sense. Why send three reporters from three different papers to cover the same event?

But she said MediaNews is known for trimming newsrooms to the bone.

“They seem to be cutting staff really thin there,” she said.