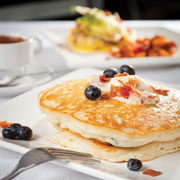 Bacon … hmmm. Bacon.” That was Nathan Bathurst’s calm, reflective response when I told him that he and his partner, Nick Carter, would be required to serve up some pork perfection to me and two hungry photographers at their Off Campus Café in south Lafayette.

I soon learned this challenge was not about using bacon; the two cook a lot of the cured cut at their breakfast and lunch spot. But for the self-proclaimed “bacon lovers,” the challenge would be in innovation. I also learned that the chefs had spent the last 24 hours immersed in bacon gloriousness: shopping, cooking, tasting, cooking more, tasting more.

“It was difficult because we use a lot of bacon, so it became a challenge to reinvent how we use it,” he said.

I started with breakfast: fluffy pancakes filled with bacon and blueberries and topped with maple-bacon compound butter. The dish had the whole salty-sweet thing in droves, and if it wasn’t for the three other plates waiting for my attention, I would have happily finished every bite.

Next, I dove into the Benedict, which included a bacon biscuit topped with smoky beef bacon, a perfectly poached egg and lemony bacon hollandaise. Bacon takes the spotlight in this über-savory dish.

For lunch, they served a twist on an all-American classic: the bacon cheese burger. The chefs cooked a heap of crispy bacon and added it to a patty of raw local beef. After the blend was cooked to perfection, they topped the burger with a bacon-blue cheese sauce, placed it atop a plump Breadworks bun and added house-cut fries. The burger is delicious—the bacon keeps the patty juicy and offers the exterior a very slight crunch.

And lastly, a plate of bacon-macadamia nut roca was served. In the almond-roca style, the toffee-like interior is dotted with nuts and bacon, topped with chocolate and given another smattering of bacon and nuts. While the bacon flavor wasn’t necessarily at the forefront here, the fat and salt cut the sweetness and make the snack a more well-rounded treat.

Bathurst and Carter thrived in this challenge, and I may never look at bacon the same way again.

Try these dishes at Off Campus Café throughout March; the Benedict will only be offered for Sunday brunch. Off Campus Café is located at 2600 Campus Drive, Ste. B, Lafayette. theoffcampuscafeco.com