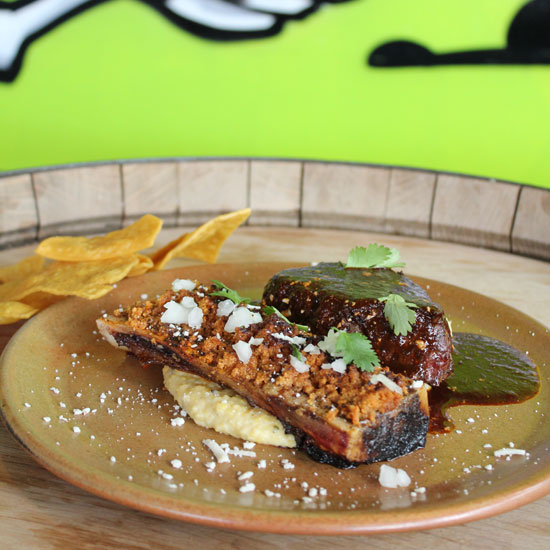 Our graphics designer is constantly telling us how wonderful a place Longmont is. Among other things, he’s head over heels for the town’s array of local restaurants. “Sure, Michael,” I agree. “It’s great.” But CyclHOPS Bike CAN-tina reminds me just how right he really is.

Oskar Blues’ latest brainchild, the taquería combines some of the best parts about living along the Front Range: good beer, bicycle culture, and authentic Mexican food. The fact that CyclHOPS would be cool was beyond question. So, we threw them our childish ingredient for this SuperKids issue, and waited to taste what they’d make with animal crackers.

“We thought of something savory and crusty, immediately,” Rogers explains in regard to his team’s brainstorming session over what to do with the kid-friendly snack.
They took split bone shanks and roasted the marrow with their own chili powder, topping it with crushed animal crackers that acted as breadcrumbs. I’ve never had bone marrow before, nor have I ever gone out of my way to try it. Prepared the way Rogers did though, I’m now craving the exalted treat. Spice from the chili was most predominant in the taste, but it was surprisingly flattered by the subtle sweetness of the animal crackers. I quickly ate this part of the dish before moving on to the beef tenderloin.

Cooked medium-rare, the filet was juicy and only made better by the thick brown demi-glace that coated it. The sauce also mixed well with the grits, which I willingly would have eaten an entire bowl of. (Can this be part of the menu here all the time?) The meal as a whole was the way I think everyone idealizes Mexican food as tasting.

Pairing well with the tacos—and over twenty craft beers that are on tap—is a full-service bike shop. Altogether, CyclHOPS is the kind of taco-tequila joint that you’d pop into after a day on the beach in Los Cabos—or in this case, a day on your bike. Include the Dia de Los Muertos-inspired spray-painted mural spanning across their neon-green wall, and you kind of forget we’re 1,500 miles north of the border. Olé!