Faces of summer: The farmer 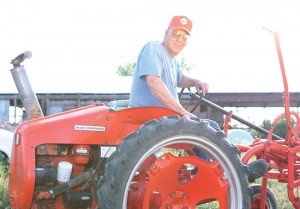 If you’ve been to the Boulder or Longmont farmers markets since they were founded in the mid-1980s, you’ve most likely seen John Ellis, better known as Farmer John. After 60 years of farming, Ellis isn’t even close to retiring. His involvement in Boulder doesn’t stop at founding the farmers market: He’s also participated in county fairs and the Yesteryear Farm & Home Show for decades. YS spoke with him about life as a farmer, his endless number of tractors and how the farmers market has grown over the past 25 years.

Since it’s the 25th Anniversary of the Boulder County Farmers Market, tell us how you got involved?

I got a phone call from John McKenzie, whose the guy who actually organized it. He was on this committee for the county to find ways to support agriculture. One of the ideas was to start a farmers market. We had several meetings in 1986 and decided we’d try having a farmers market opening in June 1987. We did and it became successful almost immediately.

How many sellers were there?

You also collect tractors. How did that hobby begin?

When I was a little kid, I lived in Ohio until I was 7. I had this Allis Chalmer tractor. I have this picture of me sitting on it and I guess that’s where it started. We moved out here, and we ended up buying another Allis tractor. I lived out in the country and I didn’t have a bicycle so I drove my tractor to my friend’s house. I’ve always been a gear head and one tractor led to another. I bought my first one in high school, and it’s almost gotten out of hand.

Do you have names for any of them?

Quite a few have names. I bought a Ford tractor off a dealer in Boulder. It was traded in by one of my neighbors, his name was Louis Dangle. So I always call it “Uncle Louie” cause that’s what people called him. I have a big four-wheel Allis tractor. That’s Big Allis.

Have you ever thought about leaving Boulder?

I never found another place that I liked as much as here. There’s a lot of people here who want local food. It’s a great market for my food.

How much longer do you see yourself farming?

I’m still healthy and feeling good about it. I still get up and have enthusiasm. I don’t know 10 years, 20 years, who knows?