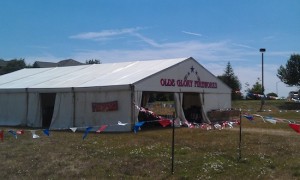 With uncontrolled wildfires running amok and creating havoc up and down the Front Range, it’s hard to imagine a worse business to be in in the days leading up to the Fourth of July than selling fireworks. But in a huge tent near the Safeway at Arapahoe Road and Highway 287, you can buy enough pyrotechnics to keep the nation’s firefighting crews busy until the snow falls.

Because of the tinderbox conditions, Coloradoans statewide are banned from using fireworks and most locations have canceled their traditional fireworks shows on July 4 because of the high fire danger. But the ban doesn’t extend to selling fireworks, leaving the decision up to individual municipalities. In Boulder County, every city except Erie has nixed the seasonal tents that sell everything from sparklers to giant tubs of “grand finale” explosives. Longmont banned sales on Thursday.

At the Olde Glory Fireworks tent in Erie, Jill Hawthorne admits that business is pretty slow, down about 50 percent from past years. She blames the wildfires and understands why sales are off.

“It’s not something I’d say I’d buy at the moment and set off,” she says, as a single customer browses the bins of firecrackers and bottle rockets.

Hawthorne sells the fireworks under contract with Denver-based Olde Glory and earns a percentage of sales as commission. In more typical years, she said she could make about $3,500 selling fireworks in the two weeks leading up to July 4, but this year she’s seen maybe half as many people under the tent than in the past.

“Lots of people are coming and looking, but not a lot are buying,” she says.

Considering that smoke from the Flagstaff Fire is visible through the tent flaps, it’s not a surprise that Hawthorne has mixed feelings about the product she’s selling, although she points out that some of the smaller novelty products like bang-snaps and black snakes don’t pose as much danger as people might think.

“Any of these novelties are probably not going to start a fire unless you’re an absolute moron,” she says.

In the end, she says it’s up to the consumer to make wise decisions. She compares it to selling condoms to teenagers—what they do with them once they leave the store is out of her hands.

“I’m just the middle man,” Hawthorne says. “What you do with it is up to you.”

The town of Erie has much the same attitude. In response to an email from YS publisher Shavonne Blades, Mayor Pro-Tem Ronda Grassi expressed confidence that people buying fireworks would act responsibly and observe the ban.

“Free market suggests that people can buy what they want but may only use the product when allowed,” she wrote. “Given the extreme low crime rate in Erie, it’s reasonable to say we have very responsible people living here. They will wait until the ban is over and use the fireworks at another time or in a place where it is legal.

“I have spoken with our Fire Chief about this as well. He tells me that our conditions in Erie are very different from our mountains and don’t pose the same risk. He didn’t recommend shutting them down.

“Our police force will also be on alert for those not obeying the ban.”