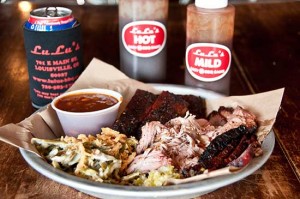 In Texas, barbecue means beef, so any place that purports to be a Texas-style barbecue joint had better bring the goods when it comes to brisket.

But I can tell you that this is better than all the barbecue I have had in Texas. Yup. It’s that good.

On a rainy Saturday night, we got a great table near the bar and settled in. The space is fun, feeling like a converted filling station, with big garage doors, a large patio out front, and beanbag toss stations set up in the back. Big-screen TVs show whatever sporting events might be going on—or “Diners Drive-Ins and Dives” doing a barbecue special. Coincidence? The special for the night was Kobe beef ribs. Tempting, to be sure, but we decided to stay on menu.

We started with PBR in a can—the restaurant’s entire beer list is delivered in cans (with Lulu’s cozies)—and prickly-pear lemonade to wash down an order of sweet potato tots with cheese sauce. The tots were tasty, and the cheese sauce was surprisingly good, but together… well, it wasn’t my thing.

For our main course, the table sampled the pulled pork, ribs, beer can chicken, spicy sausage, and, of course, the brisket, which is where the restaurant shines. This was quite literally some of the best barbecued meat I have ever eaten. Mouth-wateringly flavorful, juicy and perfectly cooked. My personal favorite was the brisket, but the ribs pulled a close second (and the pork and chicken were nothing to sneeze at). Really, I had no need for sauce, though the two varieties, regular and hot, were just the right balance of savory and sweet. Careful with the hot, though. They aren’t just whistling Dixie.

On the side, the macaroni and cheese, with the same cheese sauce as the tots, was a big hit with everyone at the table. The green bean casserole was too heavy on the cream sauce for my taste, and the Ranchero beans tasted a little like watered-down chili.

In fact, aside from the meat, my favorite thing on the plate was the PPO—that stands for pickles, peppers, and onions, and is a blend of the three, finely chopped into a sort of relish. That I could eat all day long.

Like the sides, the dessert was a fairly forgettable seasonal fruit cobbler. Kudos for using real fruit (instead of pie filling) and not making it too sweet, but points deducted for the gummy pastry.

But I am willing to overlook all of that because the brisket was that damned good. Crack me open a can of Shiner, scoop me a dish of Blue Bell ice cream, and I’m home.

Bottom Line: The best BBQ brisket this side of the Rio Grande.