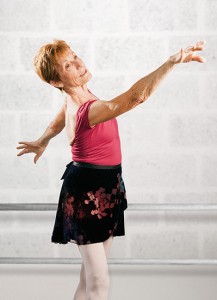 Karen Shanley began taking dance lessons when she was 6, paying 10 cents a class at Story Park in Alhambra, Calif.

“Right from the beginning, I loved dance,” Shanley said.

Over the years, Shanley has moved to countless cities and states—from Hawaii to Manhattan. She’s had two kids, she’s received her bachelor’s and master’s degrees, and she’s balanced her family, her education and her career. But the two constants in her life have been dance and teaching. From sea to shining sea and now on the Front Range of Colorado, Shanley has spent decades teaching both up-and-comers and adults the forms, techniques and philosophies behind ballet and contemporary dance. She’s an instructor at Ballet Nouveau Colorado, where she teaches classes, subs for other teachers, volunteers at the front desk, organizes events and makes herself available for all her students.

“I love to talk to kids who are at a decision-making point, when they are dealing with the questions of ‘Should I go to college? Should I keep dancing?’” she said.

With a degree in dance from UCLA—she began as an education major but switched when her professors realized her dance skills—she found she had a knack for teaching beginner and wanna-be adult dancers.

“While I was there, one of the instructors went on medical leave, and she let me teach an intro to modern dance class for general students,” she said. “I was getting positive reinforcement. I had been dancing in a professional company from ages 16 to 19. But when I went to college, it was too much of a time conflict, and it became evident that the professional performing life was not what I wanted to do.”

Shanley married a med student, which meant her growing family packed up and moved often. It also meant she had the opportunity to learn from numerous teachers and share her knowledge with countless students throughout the country. She danced for several dance companies, taught dance at the University of Nebraska and ran the dance department at Orange Coast College for 25 years.

Shanley has decades of knowledge to share, but she still has a lot to learn, she admits.

“I try to watch other people teach. I don’t think I know it all,” she said. “I think you learn from other teachers, from the students. If they are standing there looking at you blankly, they aren’t getting it. How do you find the door into their body and brain? Once you get that key then the learning is quick. If they aren’t getting it, it’s not their fault, it’s my fault. Whatever it takes to get an insight, that’s how I stay current.”

Shanley has added certifications in Palates and Gyrotonic Expansion System to her list of credentials. However, she admits that often, teaching isn’t just about innovation or originality. Dance is filled with stern, pinch-faced instructors, infamous for their unabashed honesty. Shanley says it’s because of the stereotype that she’s worked so hard at being supportive and warm toward her students.

“I really enjoy being able to share with them all that I have learned,” she said. “I think I used to get frustrated as a young dancer who wanted to ask questions and no one would answer them.”

They would say, “Just do it” or “Figure it out.” They would ignore the young dancer’s questions.

“I feel like kids are like little sponges. They want to learn,” she continued. “If they have a passion for it, or even an interest, they get more excited if they have someone who is not stonewalling them. They want to know all about it.”